Arophania [æɹə'feɪniə] (Arithide Araphein /'arəfi:n/, Dethric Arophan /'arəfa:n/) is one of five continents of Ilethes, in the south of the planet. It is the location of one of the three traditional cradles of civilisation, and home to one of the greatest civilisations, the Areth. Arophania constitutes approximately 13% of the total land area of Ilethes, and accounts for almost 24% of its population. 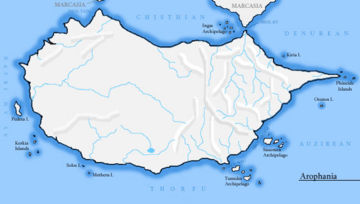 Physical map of Arophania with relief and drainage shown.

Arophania is usually depicted, in the Gathenic depiction, at the bottom of maps towards the middle, south of Marcasia but with Eresphria and Canthres on the west, and Istheusia on the east; i.e. the map is centred on Marcasia. For this reason the southern areas of the continent are exaggerated and overrepresented due to distortion in the equatorially-oriented projection.

Besides the mainland, offshore islands belonging to the Arophanian continental shelf are also considered to be part of Arophania. While this definition presents little problem concerning the Tumides and Sissemen islands, the Ingas archipelago rightly belongs on the Marcasian continental shelf save a few islands, but are culturally closer tied to Arophania. In the same way, the Hibondassian archipelago sits on the Arophanian plate, but are considered geopolitically and culturally part of Istheusia.

The rock and soil of Arophania is rich in ferromagnesian compounds, which besides constituting excellent ground for cultivation, also gave rise to a well-developed mining industry in Arithia. Due to the rock composition, volcanoes in Arophania erupt the more fluid basaltic lava, which spreads rapidly across larger areas before cooling and solidifying to form fertile lava plateaus, such as the Nimaean plain.

Alerryagi and the Eastern Seaboard

The single most prominent political entity on Arophania is the republic of Arithia, whose Arophanian portion (known as Cadaeria) occupies the eastern half of the continent as well as parts of the West Arophanian Plain, lying across the Alerryagi.

Owing to the long human presence on Arophania, the continent has been divided and redivided a great many times over by various peoples, rulers and states. As such, the borders of most historical regions have been obfuscated by time and confusion. The following is a list of the more prominent of them:

The continent of Arophania is bounded on the north by the Chisthian Sea, which separates it from Marcasia, channeling into the Issol A'i eastwards (meeting the Ingas archipelago midway) and opening up into the Denurean Sea westwards. East of Arophania lies the Auzirean Sea, and also the Issol Ardem that separates the Sissemen archipelago from the mainland. On the south Arophania meets the Thorfu, and beyond the Issol Nau lies the Tumides archipelago. The As am Iraph, or, misleadingly, the Eastern Ocean (see article on the origin of the English name), lies to the west of Arophania.

Whereas the west of Arophania is an immensely fertile plain and the east is considerably more mountainous, the east is richer in rivers and lakes than the west, boasting of the prominent Theph and Nes rivers that both source from the meltwater of the snow-capped Alerryagi and empty into the Chisthian, and the Varant river flowing west to east and emptying into the Auzirean. Crisscrossing the rest of the Eastern Seaboard are various tributaries of the three such as the Eithan, the Dobrae and the Loda, the latter of which begins life in Lake Charia, the highest and consequently most remote, pristine and scenic of the Barrier Lakes, of which other major members include the lakes Rist, Everodes, Augars and Dumache. The West Arophanian Plain, on the other hand, counts just the Caine, Sami and the Tamos rivers (all of which originate in the Hallaryagi) among its notables, and contains just one lake (albeit of considerable size), Lake Tago.

This article is a stub. If you can contribute to its content, feel free to do so.
Retrieved from "http://www.frathwiki.com/index.php?title=Arophania&oldid=18135"
Categories: