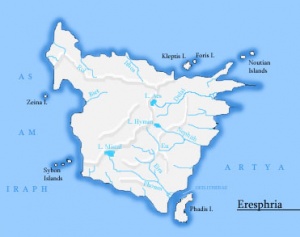 Eresphria [ɛ'ɹɛsfrɪə] (Dethric Erespherii [e'rɛsfəri:] is the fourth largest (or second smallest) continent on the planet of Ilethes, bounded by the Artya to the east, the As am Iraph to the west and south, and separated by the Deis Paphresis from Canthres in the north and northeast. The continent is noted for its vast climatic contrasts, between a warm temperate zone in the southeast and a polar zone in the northwest despite its relatively small territorial expanse. Eresphria is is located in the upper-left corner of a map in the Gathenic depiction.

The continent was originally known as Dethria, a name which, due to its identity with that of the Dethrian state, caused much confusion and inconvenience in navigation, transport and other spheres, and which thus came under increasing pressure to be changed. The change was effected by general international agreement (see Vitakho Agreement) after almost two decades of debate, and the continent was renamed after Erespha, the god of the setting sun in Dethrian mythology, literally Erespha + herii "land" = Erespherii "Land of Erespha". For the origin of the name Dethria, please see the relevant article.

Eresphria's climate is generally temperate, but along its northern coast may be polar, due to south-bound cold currents from the Reor Camoresis. The south and west, which witness the confluence of both sea and air currents from the frigid north and warm south, are balmy almost perennially, and the high precipitation has encouraged the growth of agriculture, especially in thirsty crops.

This article is a stub. If you can contribute to its content, feel free to do so.
Retrieved from "http://www.frathwiki.com/index.php?title=Eresphria&oldid=18104"
Categories: