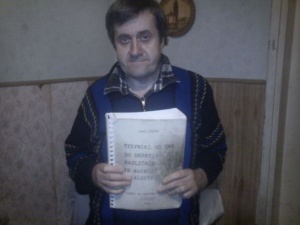 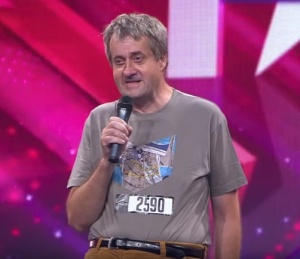 Jank on Tele Rocking the Numbers

Janko Gorenc is practically a household byword in conlanging households around the world. He is, without question, the most famous non-conlanger* in conlanging circles and is best known for his mammoth collection of numbers in different languages. (See Janko Gorenc and his Amazing Collection of Dancing Numbers in Conlangs and Natural Languages).

Janko, a native of Krško in Slovenia, began collecting numbers (1-10) in a variety of natural languages back in 1984. Some years later, he took his quest online and has probably emailed every known conlanger on the planet, asking for numbers in whatever conlangs he has crafted, no matter how scanty or complete the language itself might be. For almost twenty years, Janko has made quite the name for himself among the conlanging community, and even beyond, for this collection which now exceeds 14000 languages, dialects, cants, jargons, conlangs, natural languages, etc., etc.

In some parts of Conlangia, there is a jargon word, to be Jankoed, to be approached within hours or days of the announcement of a new conlang. Quite the honour indeed! A few malingerers have declared his collecting inquiries to be spam, but the vast majority of conlangers simply take his requests in stride, providing him ever more data for his gargantuan collection.

Janko is also, quite likely unwittingly, responsible for preserving the traces of one lost conlang, Antique Lantian.

In 2017, Janko appeared on Supertalent Hrvatska, reciting numbers (1-10, of course!) from his famous list.

A Nice Article in Slovenian about the Great Collection.
Janko's own conlang: looks like Mr Gorenc has been bitten by the conlang bug after all!
Janko totally Rocking the Numbers on Supertalent Hrvatska 2017!!