This is the Batu torch from the LCC4 Relay, translated by Fenhl from Jan Strasser's Tmaśareʔ. Parts of it can also be found on the official relay page. 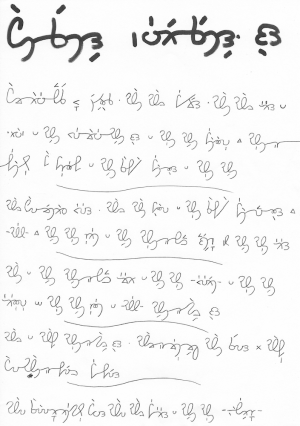 The torch in the Batu abjad

A beautiful woman goes across the bridge. A goat suddenly stops her and loudly speaks these words: "Oh! You are really very graceful and beautiful! As I am watching you here, my eyes have become full of joy. You appear to shine like the moon. I really want to marry you!"

The woman hears these words and starts to laugh: Why would you desire me if I look like the moon? I assume you don't even know my name. Yet you are talking to me!"

"Your name? Didn't you listen to my words? I told you: 'I really want to marry you!' What is your answer?"

"This is my answer!" she said, and with a quick cut of a sharp knife killed the goat and cut off his head.

And when it had fallen into the grass near the river, the loud goat's head suddenly said: "I take it you agree?"