From FrathWiki
Jump to: navigation, search
This article is a stub. If you can contribute to its content, feel free to do so. 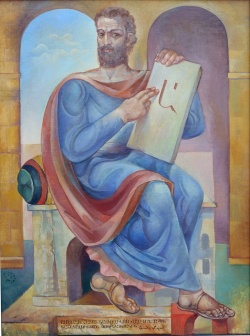 Saint Mesrop (Մեսրոպ Մաշտոց / Mesrobes Mastosius) was a 4th century linguist and theologian of Armenia. One of his great contributions to linguistics was the development of the Armenian alphabet, making it one of the earliest known deliberately constructed writing systems. He is thus also one of the very first known conscripters. He was canonized in ancient times and is recognised by the Church, East and West.

His feast day, 19 February (Armenian) / 17 February (Western), is recognised among some glossopoets as being a conlanging holiday, following a proposal by the Conlang Community in 2018, it is now established in the community that we be wished a happy St. Mesrop's day.