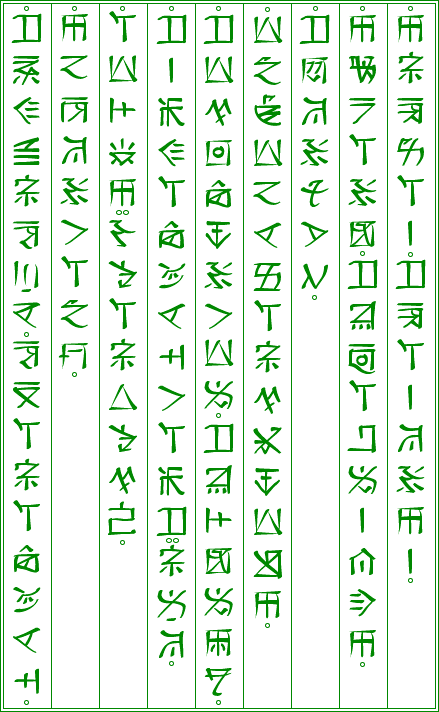 It's very difficult to understand.

See the celestial dance! It does not proceed according to plan; there are no musical instruments: a voice is the only sound.

The dance isn't taught by a lesson; it goes about randomly.

Its dancers are better than humans. Humans have not much skill. They move about directionless, as if they don't know their goal. It looks easy. I can't believe that these dancers are so beautiful. I will not visit again; it will never be different.

upea
(pron.) 3plu. pronoun that indicates no gender
utai
(contr.) contraction of /u/ and /tai/

A PP can be moved to the front of a clause, but otherwise word order is maintained.

Kamakawi is a pro-drop language. If the subject marker /e/ or /ae/ is used, the subject may be omitted, as it can be retained from the previous clause.

a particle is used which preposes the verb. The markers are as follows:

Certain discourse particles (words like "because" and "so that") are suffixed directly to these subject status markers. So if you had a sentence like Kale X Y, it'd mean "Because Y did X".

Where a verb has 2 arguments, the preposition /i/ marks the less agent-like of the two. For this reason, it's used to cover a whole range of prepositional functions, including spatial and temporal.

Certain verbs take adverbial complements. They're listed in the lexicon as X...Y. For these verbs, any objects and subjects come in between the members X and Y. Otherwise, the two function as a single verb with a single meaning.

When two vowels of the same quality occur next to one another, they're separated by a glottal stop.

The romanization system matches up fairly well with CXS, except for the following: [j] (palatal glide) = "y"; [?] (glottal stop) = "'" (an apostrophe). Additionally, capital letters are used at the beginning of sentences, and general English punctuation is used.