Borgenzco /ˈboɾɣən(d)sko/was a sister language to Gothic which was still spoken by Burgundians in 12th century Gaul. In English it is called Burgendish — a supposed modern derivative of the Old English ethnonym Burgendan 'Burgundians'. In Lucal Inglisc it would rather be Burgændisc, also pronounced /ˈbɜʴɡəndɪʃ/ . 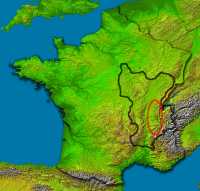 The approximate are where Burgendish was spoken (red outline) within 12th century Borgonze (black outline).
Phonologically Burgendish was about as advanced as Old English. It had shared its most recent phonological developments with the co-territorial Romance language Rhodrese as a result of long-term bilingualism.