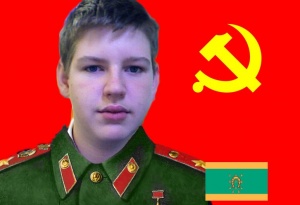 The Andersonic alphabet (Piscean: Alefbef andersonum) was conventionally - but no longer - used to write the Piscean language. It was devised in June 2007 by S.C. Anderson, editor of the Piscean Lexicon. Though designed to match the Phoenician alphabet - via which many modern-day alphabets arrived - as closely as possible, the Andersonic letters are, visually, heavily influenced by those from Latin, Greek and Cyrillic.

In a recent conference, Anderson 'called out' to all peoples of the world in a bid to promote his alphabet. He stated, 'I believe that the Andersonic system is the most accurate alphabet in implementation today. So many corruptions of glyphs have occurred in the transition from Phoenician to the majority of our modern-day alphabets. Created through scrutiny of that Phoenician alphabet, the Andersonic alphabet is true to the pure letter-forms. It can be easily adapted to by users of Latin, Cyrillic and Greek alphabets; therefore, I encourage you all to "Andersonise" your languages today. Creators of conlangs, unite and use the Andersonic alphabet!'

The letters of the Andersonic alphabet are shown below alongside their Latin equivalents, name and IPA pronunciation. 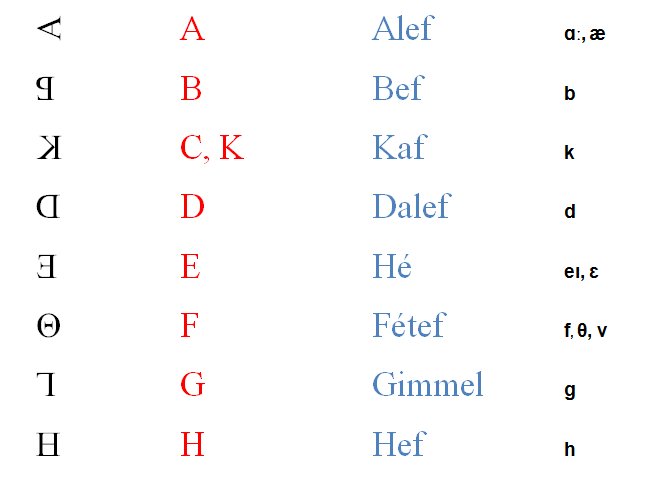 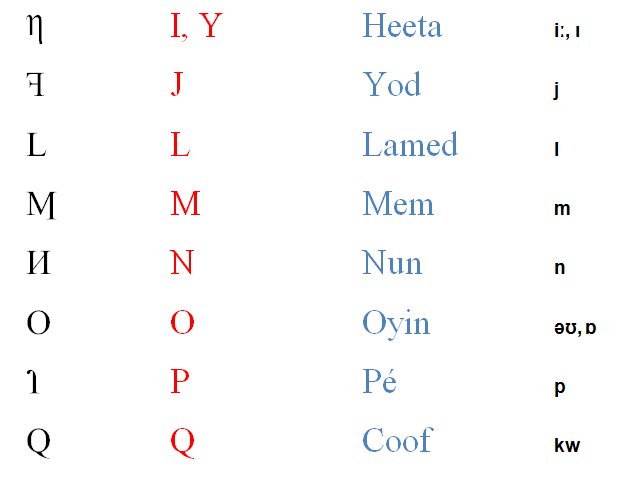 To install the font file, click on the following link, download the TTF and drag it into the Windows Fonts folder. It is provided with the intention of being used for other people's conlangs: Download the Andersonic alphabet font

Most Andersonic letters are based on those of Phoenician, but produced by altering 'models' from other alphabets.

The remaining six letters of the Andersonic alphabet are not influenced by Phoenician directly and have been imported directly from Latin, Greek or Cyrillic:

The Andersonic comma is based on a prime (Unicode U+2032) that is rotated 180º from a central point and lowered to the usual position of a letter's base (unlike the comma of the Latin alphabet, no part of the Andersonic comma protrudes below this baseline).

Placement of an Andersonic comma

In correct usage, the comma is followed by a single space - unless in quotations - but followed by an en-width space before text continues.

In addition to using the comma to separate clauses (e.g. I went to Germany (independent clause),(comma) but (conjunction) Bill went to Japan (independent clause)), as in English, S.C. Anderson encourages people to use them also before noun clauses that begin with 'that', 'what', 'where', 'when', etc (e.g. Let me know what you plan to do//when you get to London.).

The Andersonic comma plays an important numerical role as a decimal separator, where apostrophes (an exact replication of the prime) are used as thousands separators.

Used together, the comma and apostrophe are the main constituents of quotation marks. Quotations are introduced with a colon and en-space (if introduction is required), opened with a comma (no space) and closed with an apostrophe. If the quotation includes a full sentence, it is customary in Piscean to place the punctuation, such as commas and full stops, within the quote marks.

Should there be a quote within a quote, the same rules apply except for substituting pilcrow (Unicode U+00B6) for both the opening comma and the closing apostrophe.

When talking about the Andersonic alphabet, the word 'period' is not equivalent to 'full stop'. It can refer to any of six types of punctuation with which to end a sentence: full stop, ellipsis, question mark, exclamation mark, interrobang or abstract mark.

When writing in the Andersonic alphabet, S.C. Anderson encourages the use of 'embarkments' before sentences that end with emphatic periods, namely question marks, exclamation marks, interrobangs and abstract marks. The embarkments are inverts of their period equivalents, excluding the 'lower stop'.

Colons and semicolons are written the same way in the Andersonic alphabet as in the Latin alphabet. Generally, colons are used only to introduce speech, while semicolons are the single way to connect two sentences without conjunction.

Colons and semicolons are not preceded by a space, but followed by an en-space.

Note that the encouraged (Piscean) format instructs the writer to always follow colons with a capital letter, but always to follow semicolons with a lower-case letter.

For more information about transliterating umlauts in loanwords, see below.

The Andersonic alphabet uses transliteration to render the words of a language that normally uses another writing system for the comprehension of names of people, places and companies in Andersonic texts. All non-Andersonic letters are mapped directly to their Andersonic equivalents, although some arguably require transcription for the purpose of disambiguation. Without transcriptions, there is no way to distinguish between alternate letter pronunciations or to convey accents.

Confusion arises, in Piscean, in such instances as soft C's rendered as hard C's in the language because they are the only option. The name 'Charlotte' is seen by Piscean-speakers as 'Kharlotte'. As the Andersonic J is conventionally pronounced as English Y, the name 'Jessica' is seen as 'Yessica' and 'John' as 'Yohn'. It is generally accepted that skills must be learned to recognise the appearance of names and how that reflects their origins, thus how it is properly spoken.

When transliterating umlauts, circumflexes acute or grave accents, they must be dropped in favour of a following E. ë becomes ee, for example. Even the Andersonic umlaut-A is not used for transliteration, giving way instead to ae. Accents on consonants are ignored. 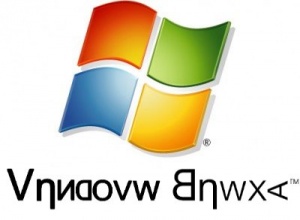 Names of foreign companies, as a rule of Piscean, remain the same as in their native languages (i.e. aren't translated), yet are transliterated into the Andersonic alphabet. In New Pisces, however, foreign companies are an infrequent sight. Its purist communist approach has led to it becoming virtually self-sufficient. The thumbnail to the right depicts the non-Piscean computer operating system that has been 'allowed' by the government and thrives in the country. S.C. Anderson commented, 'We can't make everything ourselves and Windows Vista(TM) is my favourite OS, as well as the entire country's favourite, so I made it the single official operating system.' 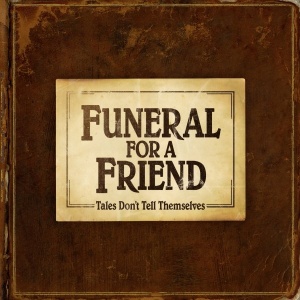 This rule also applies to the music industry, where names of bands, album titles and track titles are transliterated into the Andersonic alphabet, as shown in the thumbnails.

Keyboards in New Pisces are based on a PFGRCL layout, with the exclamation and question marks appearing beside each other, a Yen symbol added to the numerical row and many punctuation marks from the bottom row of letters replacing keys at the top row of letters. It is said to be the optimal keyboard layout for the Piscean language; containing all vowels in consecutive positions on the second row of letters, it apparently increases hand alternation. Punctuation on the PFGRCL keyboard is moved from the inaccessible bottom-right hand corner of the keyboard, serviced by the inherently weak pinky on the QWERTY keyboard, to the more open top-left corner where the Q, W and E keys are found. Question embarkments are entered with Alt+2; exclamation embarkments, with Alt+1; interrobang embarkments, with Alt+Shift+3; lower-case umlaut-A's, with Alt+A; upper-case umlaut-A's, with Ctrl+A.

In order, the letters on the keyboard include:

Native names of letters, punctuation marks and variations of the standard alphabet

(Refer to 'letter-forms' for English pronunciation of letter names.) This is a list of the different languages that use the Andersonic alphabet, their Latinised native names of certain features and any variations from the standard (Piscean) Andersonic alphabet.