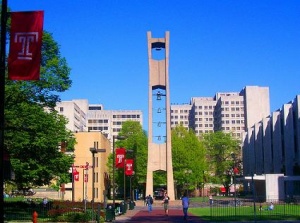 The Bell Tower of Temple University

It was a system of writing created by Timothy Patrick Snyder and Rebecca Spatz. It was named for the Bell Tower at Temple University, where the two created the writing system. It was created to make a generally more phonetic form of English, without having accents and extra letters. The only symbols which are not on standard English Keyboards are þ and ð, used for historical purposes connected to Old English, but can also be replaced with the diagraphs th and dh respectively.

Tawyr employs the Dutch technique of doubling a vowel to indicate Tense/Lax variation. With the exception of y all vowels have a single and double form, and all of those except for a and aa only differ by Tenseness or Laxness. Most other sounds would be similar to the standard English equivalents, with the exceptions of c, x, tc, dx, j, and '.

Here is the Chart showing the system with the IPA:

My friend and I made this new system for writing English, because we wanted a phonetic system of writing English which can be used with the normal keyboard. It's fairly simple, and based a good bit on the IPA with influences from Dutch, Icelandic, and a few others, though most of the consonants are the same as standard English. I want to know what people think, and if they'd be willing to try it.
Timothy Snyder