Sajem Tan or Common Honey is a non-naturalistic artistic colllang started in November 2015 by members of the CONLANG mailing list.[1] It currently has the beginnings of a geofictional setting associated with it and the team has created a sort of quasi-culture around the language. As of 30 May 2016 the phoneme inventory, orthography, morphology, and syntax were fully functional or nearly so. The lexicon is growing rapidly and various writing and translation projects have been undertaken.

As the language and its documentation grow, we will separate these sections into subpages.

As stated above, Sajem Tan has a fictional world (Sajem Dasnan) and a culture built around it with several myths and mythical animals/plants. However, these are in their rudimentary stages, and many important things, such as the geographic layout of Sajem Dasnan, are not yet determined.

The Sajem Tan community is based on the following creation myth, posted by Shanoxilt Cizypij on 30 November 2015[2]:

So very long ago, during gray and overcast days past, Thunder rumbled. From the shaken sky tumbled Thunder's noises and with them Rain. By the fallen Rain, Flower was nourished and River was filled. Upon its web, between Flower and Stone, Spider gathered Rain. When Rain ceased and Thunder silenced, Bee gathered Flower's pollen. Bee then flew away to its hive to make our Common Honey. Upon the hive came Bear who so loved our Common Honey that it shared with all who would sample. Witnessing all this, from atop Stone, Bird declared, "May this recur until all our tribe partakes of Common Honey."

The above myth only describes the first nine tribemembers; however, several more have joined since the original team was established. An effort has been made to write a myth discussing tribemember origins. Myths may also de

One day, as Common Honey was becoming bigger and more complex, the tribe decided they needed someone to keep track of it all. Because of this, they called upon Bird. Bird contemplated this for a while but thought of nothing. He decided that maybe going for a short fly would do some good. As he was flying, Beneath his wings, Bird noticed Wind, an ancient force who had watched our Common Honey’s creation. Upon Wind's flowing trail, Thunder's echoes, the words of the past, were heard. Feeling that Wind was up to the task, Bird invited him to the tribe. Wind set to work immediately, keeping a record of how Common Honey was created. Our Common Honey finally had a history!

Several fictitious plants and animals have been devised for usage in Sajem Tan mythology, which you can find in their own articles. The tetanah -- kitten-sized telepathic flying snails with laser eyes (?) that fix the universe by singing in Sajem Tan, and the colmekah -- bonsai trees that recieve information from inanimate tribemembers such as Star and Wind who can easily interface with them and telepathically send that data to any creature willing to accept it. They are said to have created the roots of plants so that they can more easily talk through them to other colmekah. Then there's the Pit of Bad Ideas, a place where awful ideas, including different creatures, go to die.

Each member's name is, ideally, associated with a role which that person takes in developing, using, or describing the language or the conculture. A list of tribemember names follows; a more detailed one can be found here.

Should we delete this since we have the Miraheze page?

Each of the roles has certain taboos as well as responsibilities for the development of the language. For instance, Bee cannot refer to the swift feathered one by name, Thunder must never rhyme, and River must always mark tense. Animate roles (Bird, Bear, Bee and Spider) must speak in the third person, and vegetal roles (Flower and Tree) in the second. This last taboo concerning animate and vegetal members only affects tribemembers; an animal or a plant who does not belong to the tribe would refer to himself in the first person as normal.

This is the most current version of the phonology, built off of the original phonology (see below) and romanization, with some minor changes: namely, /ʎ/ became /j/, /ɵ/ became /ʊ/, and /ɤ/ became /o/.

This is the old phonology and its romanization. It was created by Thunder at the beginning of the project, and it was used until the Age of Great Reforms.

Sajem Tan morphemes are grouped into two groups: roots and particles. Roots consist of zero or more C(C)V syllables followed by a C(C)VC syllable, containing a restricted subset of vowels: /æ/, /œ/, /e/, /ø/, /i/, /y/, /ʌ/, and /ʊ/. Particles are mostly used for derivational and inflectional suffixes as well as pronouns, postpositions, ideophones, interjections, and conjunctions. They consist of one (C(C))V(C) syllable using the other vowels not used in content roots: /ɑ/, /ɛ/, /o/, /u/. debatable

To the right is a flowchart explaining the syllable structure in case you're still confused.

Sajem Tan has _ parts of speech: nouns, verbs, describers (which corresponds to adjectives and adverbs in English), postpositions, conjunctions, interjections, and other particles such as ideophones and lexemicizers.not sure about this, what parts of speech dothe particles break up into? The part of speech of a word is not as fixed as in English; zero-derivation is much more common. For instance, the noun ţnamök "pizza" can also be used as a describer or a verb. This is common in stative constructions; the copula zan is often omitted: Ţnamök zanum zo "It is pizza" becomes Ţnamökum zo "It is pizza".

Under the category of describers are evidentials. Sajem Tan is a very head-final language. For instance, in noun phrases, the head noun comes last, after the describer (adjective) and genitive argument. In postpositional phrases, they

Sajem Tan's OVS word order requires some explication. Typical, high-agency transitive verbs put the object first, then the verb, then the subject; neither subject nor object gets case marking because they're marked by position. E.g.,

Intransitive verbs put an agent or force-like subject after the verb, but an experiencer or patient-like subject before the verb. E.g.,

Experiencer verbs which would have a direct object in English generally put the experiencer before the verb, and the thing experienced before that, in the focus case:

The copula "zan" is an exception to the rules of experiencer subjects and invariably places the subject after the verb, even though it would typically resemble an experiencer much more than an agent.

When making a relative clause, additional information is placed in square brackets before the noun being modified. Take the example sentence "thnamolk kygykfeh zeh." (He eats pizza). When modifying this to say "He eats the pizza that I made", one must provide "that I made" in brackets before "pizza." This would be written "[fmyvuhkfeh seh] thnamolk kygykfeh zeh." (He eats pizza [I made]). Square brackets are pronounced /mu/ for the left bracket and /om/ for the right bracket.

(Stone will write this part)

Marked on the verb (agglutinating suffixes)

Aspect markers for verbs are obligatory. If you want to explicitly mark tense, then you have to use a mood auxiliary.

That is, the nonpast dictionary form of an auxiliary verb would have "i" or "ol" while inflected past forms would keep the same consonants but change the vowel as above.

For examples on how these are used, refer to the lesson on the Sajem Tan wikiversity page https://en.wikiversity.org/wiki/Sajem_Tan/Morphological_cases

Various derivational suffixes can be found in the lexicon.

Senary numbers are used in formal or poetic registers, for items naturally occurring in groups of six, and for units of time smaller than an hour.

Sajem Tan has two words to denote a shape: "duhfnet" for 2D shapes, and "golduhn" for 3D shapes. To say how many sides a shape has, you add the word for that number in front of the word.

Animacy in Sajem Tan does not depend on any notion of personhood. Instead, animate pronouns are used for those beings in the kingdom Animalia, vegetal for all other living beings, and inanimate for everything else. The neutral series may be used in cases of mixed, unknown, or undisclosed animacy.

All the personal pronouns can be used as demonstratives. Confer with the reference grammar for more information.

The primary colors in Sajem Tan are orange, green, and purple, the same as English's secondary colors:

Creating the secondary colors (red, yellow, and blue) is done using a portmanteau system. Take the first syllable of one word and combine it with the second syllable of the other word. It doesn't matter which order you put them in, they will always yield the same color.

But in the standard color wheel, there are steps in between these colors, such as blue-purple or red-orange. To say these, you'd simply duplicate the first syllable depending on what color it is closer to. For a more orange red, you'd add an extra "sni"; for a purpler blue, you'd add an extra "ny"

Here's a chart that sums up everything in case you don't care about the logistics of the colors. 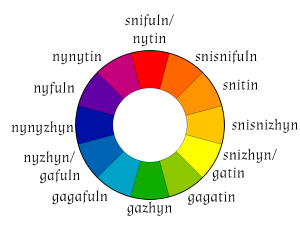 Stone created a script for Sajem Tan. The original Listserv post is here.

Words that are related somehow are included in the etymology section.

A Github repository of tools can be found at https://github.com/mr-martian/Sajem_Tan

An index of Github tools: http://mr-martian.github.io/Sajem_Tan/index.html

The Wikiversity Courses on Sajem Tan are available to practice basic skills! https://en.wikiversity.org/wiki/Sajem_Tan