Norwegian is a North Germanic Language spoken in Norway. It is a decedent of Old West Norse.

The primary location where Norwegian is spoken is in Norway. The name Norway in English comes from the Anglo-Saxon name Norðweg meaning North-way. This is also seen in Old Norse in the word Norðmaðr which means both North-man and Norwegian (in that sense they might be one in the same). 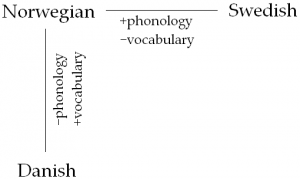 Norwegian has two standards, Nynorsk and the more popular written variation Bokmål. Norwegian Orthography is very close to that of Danish, because for a long time the Danish had control over Norway. However, the spoken language is closer to Swedish. This means Swedish and Norwegian people would more easily understand each other in conversation, while Danish and Norwegian people would better understand each other's written languages. Danish speakers can understand Norwegian better than the reverse, due to Norwegian having a different phonetic structure to orthographic spellings. This makes Norwegian as a language dead center between Swedish and Danish.

In Norwegian there is a separation between Long and Short vowels. There are minimal pairs such as tak /taːk/ roof, verse takk /tak/ thanks.

There are two numbers in Norwegian: Singular and Plural. Singular is the usual state of the noun, and the form found in the dictionary. The Plural is formed by adding -er to the end of the noun. In neuter nouns with one syllable, the plural can be identical to the singular.

There are two types of articles for English, Indefinite and Definite. The number also comes into play, the indefinite plural is mentioned above. The definite articles in Norwegian are attached to the end of the noun. The indefinite article would go before the noun. The Common form is en, and et for the Neuter form. So to say a dog it is en hund, and the dog is hunden. And to say a hotel it is et hotell, and the hotel is hotellet. In the plural, the informal ending is -er and the formal ending is -ene. So to say dogs it is hunder, and the dogs is hundene. And to say hotels it is hoteller, and the hotels is hotellene. In monosyllabic neuter nouns, the indefinite plural ending -er is not present, though all other forms are. So the singular form in the indefinite of a house is et hus and the plural indefinite form of house is just hus, with the definite being huset and husene in the plural. Quite a few Norwegian nouns have a irregular forms.

Old Norse, like its (sometimes distant) relatives Old English, Icelandic, and High German, had a complex series of cases that would be used for every noun. All of them had around four (Old English had the remnants of a 5th, which later died away) and were as follows: Nominative (subject), Accusative (direct object), Dative (indirect object), and Genitive (possessives). However, in modern Norwegian, like Danish and Swedish, the first three cases were merged into one, and the Genitive somehow survived (like in Modern English). The ending, similar to English, is -s.

Adjectives agree with nouns according to gender, definiteness, and number. There is a Common indefinite, Neuter indefinite, and everything else (which all have the same form). The common indefinite form is usually the root of the adjective. The Neuter indefinite article often has an ending of -t. For everything else, such as indefinite plural, definite plural, definite common, and definite neuter, the ending -e is the regular ending. There are several forms which do not take the proper endings, such as forms which end with -ig or in most cases, -sk which don't have a neuter indefinite form, but does have the -e in the plural. There are also those which add -tt in the neuter indefinite, especially if its stem ends in a vowel and the vowel length must be preserved. Some have to convert the last consonant in words ending with two consonants, into a t. An example might be sunn to sunt.

Most adverbs that are formed from Adjectives use the neuter form, so god good, becomes godt well. Another major ending for adverbs is -vis, with examples such as gradvis gradually. There are several other adverbs which have their own specific meanings and usages, such as the negation ikke not, nå now, lenge long, and alltid always.

Some adverbs change form depending on if the verb is a verb of motion or not. Most of the differences involve the suffix -e, but others such as her vs. hit here and der vs. dit there are a bit more irregular. Examples of this might be:
Komm hit! Come here! Jeg er her. I am here.

Main Articles: Norwegian Verbs <i>
The infinitive in most Norwegian verbs is formed by the root and å before it (similar to English to) and by adding -e unless the word has one syllable, i.e. å kjøpe to buy, å skrive to write, å like to like, and å prøve to try. There are quite a few exceptions to this rule, such as if the root of the verb is different than the infinitive form (irregular), such as å være (to be, whose present form is er). For monosyllabic verbs, the root is the form given, and since almost all Norwegian verbs end with a vowel, these usually don't need the -e suffix. Examples include å se to see, å bo to live.

Norwegian verbs are not distinctive according to person and number in the subject. This means that the subject is required in order for the sentence to be understood. The verbs å være to be and å ha to have are important verbs that also do not make a distinction according to person and number. A few verbs have irregular forms in the present tense. Here are some examples, one from each of the four classes, with pronouns included:

The future tense is formed in Norwegian in a similar way to the way it is formed in English. It uses modal verbs, specially vil and skal, which are related to English will and shall. The former, vil which is related to German wollen as well, means more along the lines of want in the future tense, and shall is more like apathetic in nature. The expression kommer til å is another one used to express the future tense, which is equivalent to English to be going to. Here are the samples using the same verbs above.

This is used in a way similar to English

†And alternate ending is -a instead of -et.

The perfect tense is used with the verb ha + verb form.

The passive voice is formed two different ways in Norwegian. The first involves an auxiliary verb, å bli, meaning become or remain, and the past participle of the verb. The other way involves adding -s to the end of the verb.
With å bli:

The Modal verbs and Auxiliaries have few forms, but they do including infinitives and past tenses. The Auxiliaries are necessary for a lot of things such as the perfect and passive formations They are as follows:

This page is by Timothy Patrick Snyder