Kala conscripts are many and varied. Rather than multiple pages explaining each of them, this page serves as a working list with a consistent example across each script. Each sample is of the sentence below:

Han Moya is an adaptation of Hangul for writing Kala. It is written horizontally, in lines running from left to right. It can also be written vertically in columns. 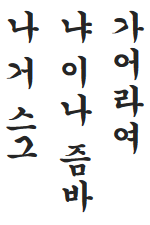 This is the most commonly used script for translations and notes. Its written form is identical to the presentation page.

Moya is a strictly calligraphic abugida for Kala. Adapted from my oldest script Moj. It can be written left to right, or vertically, top to bottom.

This is the oldest script used by Kala. It is quite easy to write but does not have the aesthetic appeal of its presentation page unless written with certain types of pens.

Omyatloko These glyphs are logosyllabic, combining 252 logograms (which represent whole words) and 220 syllabograms (which represent syllables). These are primarily meant to be an epigraphic system, but a handwritten version is possible. Writing direction: vertical from top to bottom and from left to right. These glyphs are a mixed system like Japanese or Mayan, consisting of logograms and featural syllabic glyphs. Unlike Mayan glyphs which are logograms complemented by a set of syllabic glyphs, this system is primarily a syllabary complemented by logograms. The term tloko means “syllable”, while omya means “carve; etching”. Both can be used to refer to this writing system. 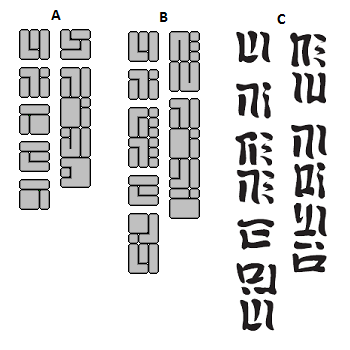 This script is under constant development but for the moment is on hold. The handwritten form is not used as often as the "glyphic" form. In the above; A) uses both logograms and syllables B) uses only syllables C) is the "handwritten" form and only uses syllables.

No longer used, or only decorative

Naua is a cursive or connective syllabic alphabet invented to write Kala. Naua is a decorative script for Kala and is adapted from Ajan, which was originally created around 2002 and inspired by Nüshu. 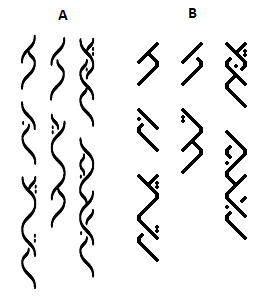 Difficult to write and somewhat harder to read, this script is hardly used as often as others but was specifically adapted to be the primary script for Kala. In the above; A) this is the calligraphic version B) this is the "textual" version.

Kenaya (or kenamoya) is an abugida or alphasyllabary and consonant–vowel sequences are written as a unit: each unit is based on a consonant letter, and vowel notation is secondary. It can be written vertically in columns, or horizontally in rows. 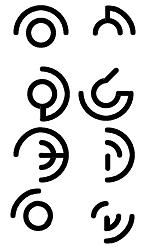 This script is rarely used and is mainly for decorative purposes. There is no handwritten form of this script. It's fairly impractical and requires a template for forming each glyph accurately.

Kitseya is a Brahmic inspired abugida for Kala. Adapted from the Norstrilian script by Ian James. It is written left to right. 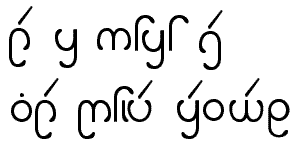 This script is rarely used but is much easier to write than most of the other Kala scripts.