In the FrathWiki page editing view there is a section beneath the main edit box called Special character insertion which looks something like this: 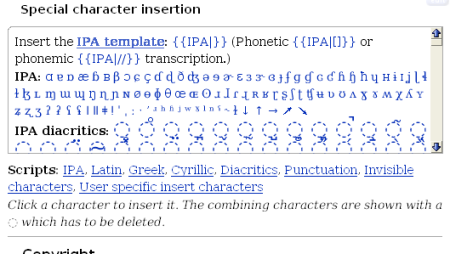 From top to bottom:

The character insertion scroll box
This scroll box contains several sections each consisting of Unicode characters from a certain script or category of characters:

IPA
Recognised IPA characters as listed on John Wells' site. The combining characters are shown with a ◌ which has to be deleted.
Latin
These are the characters of the Latin script as understood by Unicode. It probably differs from your idea of 'the Latin Alphabet' in terms of the size and nature of what it includes. Inter alia all IPA letters are contained in the Unicode Latin script.
Greek
The Greek alphabet plus punctuation and symbols peculiar to Greek. Also some symbols used in pre-classical Greek and in non-Greek languages which used to be written in the Greek alphabet.
Cyrillic
Cyrillic script for Slavic languages and several other languages of the former Soviet Union.
Diacritics
Common diacritics, shown in a larger font size so as to be easier to identify. The combining characters are shown with a ◌ which has to be deleted. Those most crucial to phonetic transcription are repeated in the IPA section.
Punctuation
Several punctuation characters not found on an ordinary keyboard.
Invisible characters
Some characters that are helpful for improving display but are not themselves shown as mark on the screen or paper. They are inserted as HTML entities so that one can locate them in the edit box.

You can make your own user-specific set(s) of insert characters by creating a page http://wiki.frath.net/User:<your_username>/charinsert (you can create it easily by clicking this link) and populate the page with one or more HTML paragraphs on this pattern:

See User:Melroch/charinsert for an actual example!

Tip: You can even provide easy access to your favorite templates this way, as long as you remember to replace any spaces in the template name with underscores _. You can put a + where you want your parameter text to go.

A word of warning

Update to the above 9 mar 2009: Actually it would seem from the Wikipedia page on U+034F COMBINING GRAPHEME JOINER that it is at least theoretically perfectly legitimate to use this character to prevent canonical recomposition, which makes much of the discussion below obsolete.

You are therefore henceforth advised to insert &#034F; in your <charinsert> templates and pages wherever you want to force precomposed characters of i and a diacritic above not to be decomposed when combined with a diacritic below, e.g.í&#034F;̨ to get í͏̨ rather than į́.

However it also turns out that using the entity &#034F; rather than the actual character doesn't render correctly either, which makes insertion with < charinsert> a bit tricky, since this is an invisible zero-width character! I created Template:CGJ to help with this.

The behaviour is not an error of MediaWiki, but the usual Unicode normalisation, considered correct. If you get bad results, then either your browser or your font is broken, not MediaWiki.

So some would recommend not to hack-fix a broken behaviour of a browser or font, but instead to use a working browser or font, or if that is out of the question (for whatever reason), live with a distorted display, and/or inform the maintainers of the browser or font of not being Unicode compliant.

Others think that computers should adapt to humans and not the other way around, want as correct display as possible now, and won't sit around until someone fixes the problem if they can fake it now. "Sometimes you can't make it, The best you can do is to fake it"! [1]

Here is the hack-fix if you dare to use it: put a zero-width joiner character &zwj; between the precomposed i with a superscript diacritic and the combining subscript diacritic, writing e.g. ī&zwj;̨ — i.e. &#x012B;&zwj;&#x0328; — to get the right thing. Unfortunately you can't directly insert &zwj; with Charinsert, so rather than writing <charinsert>ī&zwj;̨</charinsert> you must write <charinsert>ī&amp;zwj;̨</charinsert> or there will be no ZWJ at all, neither as an invisible character or as HTML. Life is hard sometimes! ☹ This is certainly an abuse of the ZWJ, but it works to get what we want, so let's have no qualms about it! ☺

Note
I guess it would be at least quasi-compliant to use the Combining grapheme joiner character &#x034F;, which at least currently produces the right result, instead of &zwj;. It can only be entered as a numeric entity, however (or as an actual invisible character!), and I guess I'm not the only one who has trouble remembering numeric entities... Anyway, I've changed my user charinserts. --BPJ 02:36, 5 October 2007 (PDT)