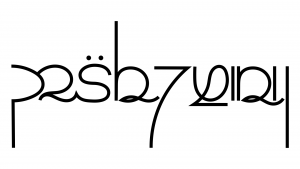 fantazkirain [ˈfän.täzˌki.ɾäɪn] (formerly known variously as fenhlkirain or viossakirain) is a writing system designed by Fenhl, originally for Viossa but now serving as a generic script. The name is Viossa for “fantasy letters” (or “fantasy glyphs”, since the script is not strictly an alphabet). It was originally created in 2015, with small additions made over the years to accomodate some phonemes and clusters that rarely or don't occur in Viossa, to coin new logograms, and to extend and codify the ligature system. It was designed to superficially resemble a writing system that could have naturally formed in a Viossa-speaking community, and thus takes vague inspiration from various writing systems including Greek, Latin, Cyrillic, Hiragana, Wanya (in turn inspired by Cyrillic, Greek, and Latin), Chinese, Arabic, Batunurisi (in turn inspired by Futhark (via Wyunurisi), Canadian Aboriginal syllabics, and Arabic), and the Tengwar. It is intended as a calligraphic script written with a ballpoint pen.

Much like Latin and Greek, fantazkirain is written in lines from left to right and has a base height for small letters as well as ascenders and descenders. There are two sets of basic units: 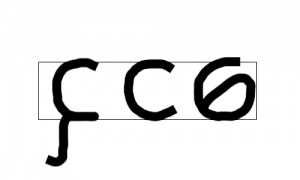 The canonical order of the kirain is:

The following diacritics are used:

Note: combining g is not considered an obakirain or unakirain in this section, as its behavior has been specified above, and kirain generally do not use variant forms for it.

If a diacritic would be attached to a letter that cannot have that diacritic (or to the start of a word):

The canonical order of the kotoba is:

Some kotoba like What, This, or That can be combined with other kotoba to form compounds, regardless of whether the spoken word(s) they represent can be analyzed as the individual kotoba. For example, "ka plas" and "doko" are two ways to say “where” in Viossa, and both can be written as the kotoba What followed by the kotoba Place.

Ordinals are written with the suffix Es, derived from the Viossa suffix for ordinals (e.g. "kasi" “eight” → "kasis" “eighth”).

There is also a name marker, used as a prefix for names and proper nouns. It is not read aloud. Rules:

Regardless of the language being written, fantazkirain mostly uses the same punctuation rules as English, including apostrophes to indicate contractions, such as the Viossa "f'un" (“my”). The main difference is that straight ASCII quotes ("") are used instead of typographic curly quotes (“”). fantazkirain uses logical quotation.

The following proposal will be made to the UCSUR, leaving the decision of where to position the block to KreativeKorp. The following table uses a starting position of N as a placeholder.

This chart uses a Ge Tolka as a visual placeholder for combining g. Its actual appearance varies depending on the preceding kirain (see #Diacritics).