From FrathWiki
< Wanya
Jump to: navigation, search
This page contains text in the Wanya alphabet and romanization. It renders best if you have the Unifont CSUR and Geneva fonts installed.

Wanya can be written in a number of different systems: the native Wanya alphabet (); the Unicode-based romanization which always has exactly one letter for one sound (or letter in the native script); the ASCII-friendly romanization which only uses Latin capital and small letters, spaces, and optionally punctuation marks; and Ajan. Here they are in comparison (Ajan is to be added): 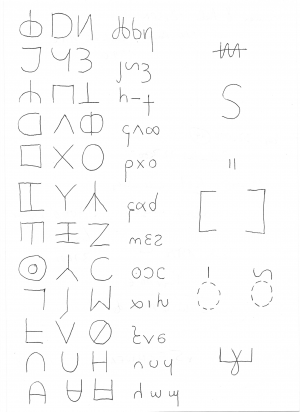 KalaΔəTek, the Wanya alphabet and symbols.

Wanya's native script is an alphabet, shown in the image.

The first 3 columns are capital letters, the next three are small letters, and everything else is symbols. After the standard vowel letters (rows 5 and 11), the diphthong vowel letters are listed (rows 6 and 12).

The symbol that looks like a striked-through sine wave (or the Latin small letter m) is the equals sign (dezdanyo). It is commonly romanized as “=”.

The symbol that looks like the Latin capital letter S is the number sign (gurunyo). It is commonly romanized as “#”.

The symbol that looks like two small parallel vertical lines is the comma (kaskanyo). It is placed at about the same height as a Latin comma, and commonly romanized as “,”.

The symbols that look like an opening and closing square bracket, respectively, are the opening an closing parentheses (kure and mai). They are used as a shorthand for the words they are named after. They are commonly romanized as “[” and “]”, but in some texts they are transcribed as ‘“’ and ‘”’ when they delimit direct speech, “[” and “]” when they occur in numbers, and “(” and “)” otherwise.

The symbol that looks like a Greek small letter Gamma and a rotated square bracket is the paise sign (nainyo), which is also used as a shorthand for “this space intentionally left blank” or “nothing to see here”. It is commonly romanized as “_”.

The remaining two symbols, here shown on a circular placeholder character, are placed on letters.

The one that looks like the Wanya small letter ɹ (or a flipped tilde) is the tədeinyo, also called ɹənyo, or even less formally ɹətek). Like the oxikonyo, it is commonly placed on the letter Ǝ or ə. A letter with this mark is only written (and pronounced) when required by the Wanya syllable structure. It is usually romanized as parentheses around the letter in question.

The image lacks the unit symbols. The unit symbol sol (which represents one day) looks like an eight-pointed star, or an X and a + on top of each other. No other unit symbols have been created yet.

Wanya is reserved at the UCSUR as follows:

Some parts of this article still use the same code points as the old Wanya font:

Both tables use the ASCII-friendly romanization as the Unicode letter names. A new version of the Wanya font which uses the UCSUR code points is in the works.

This is what is used on FrathWiki to transcribe Wanya.

The Unicode-based romanization uses the diaeresis to indicate a vowel cluster, for example:

Each example could theoretically be a different word. Kuai cannot be a Wanya word since triphthongs are not allowed.

Since the native alphabet doesn't use any punctuation marks, they are optional in the romanizations.

The diaeresis in the Unicode romanization is sometimes replaced by a colon:

Wanya can also be written in a variation of the Ajan abjad, which is written in vertical lines from top to bottom, left to right.

Since Ajan does not distinguish between capital and small letters, the start of a new sentence is indicated using either a line break or a horizontal bar.