Altherkin Itak (lit. King's Language Words) is an A posteriori conlang based on many natural languages. The language was entirely created by Motonjia in 2010 - 2012. 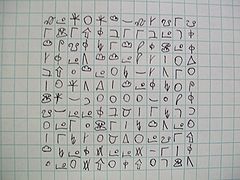 Example of Altherkin Phonetic Script, The note discusses an Anime, and the title of the Anime appears in Japanese.

You'll notice the frequent use of apostrophes in words. These are there to indicate a partial stop as used in Cebuano. For example, aa would sound like aah, while a'a sounds like ah-ah. It may also be used with consonants. It typically appears in-between syllables when there is possibility of mispronunciation if the syllables were to be pronounced together.

If Time Tense is not indicated, the sentence is automatically Present Tense. To indicate past, future, or a certain day/ month/ year/ etc, simply put the words at the head of the sentence followed by a comma. The way to express yesterday or tomorrow is to say deika(day), then either fotei(front) or afutei(back). Indicating today you say "deitei ima".

I am very sad today.

Tomorrow, I will kill the murderer.

Day infront, I the murderer kill.

The murderer is dead.

The murderer die is.

His Mother is sad now.

Now, Mother of he cry big is.

First Person; I Me (self)

word for "meat" appears after the word for "fish" to differentiate it from a whole live animal.

Second Person; you your (specific other)

Third Person; he she they them (they and them with indication of specific person)

Fourth Person; someone everyone they them (they and them without indication of specific person)

Statement: Someone, do something! - Jin, werben! (lit. "Person, act!" the something to be done is implied)

Nonpersonal; it that (inanimate and nonspecific)

How is the weather today? - Deikan ima, Ta ya nareka?

Languages that roots, suffixes, and occasional words were borrowed from to create Altherkin

Emishi (contemporary with Yoyoi, related to Joumon and Ainu peoples, had an effect on place names in Tohoku)

Nahuatl (Language of the Aztec)

The Lord's Prayer in Altherkin Itak