Kalo is intended to be a minimalist artlang, not an auxlang. It draws primarily on vocabulary from the five most spoken languages in the world; Mandarin, Spanish, English, and Arabic (Hindi is used sparingly although it is spoken by more speakers than Arabic). The grammar is mostly isolating with very few elements of inflection, mostly to show plurality or possession.

Kalo is NOT meant to mimic, replace, or be inspired by Toki Pona or any IAL. Any similarities are based on design aesthetic coincidences and the minimalist nature of the language.

There are two diphthongs [ai̯] ai, and [au̯] au. These are rare and typically only occur word-finally.

All syllables are of the form (C)V(N), that is, optional consonant + vowel + optional final nasal, or V, CV, VN, CVN.

A few syllables sequences are disallowed; /ji, wu, wo/. Also, a syllable-final nasal may not occur before /m/ or /n/ in the same root.

If desired, an adaptation of Hangul may be used to write Kalo. 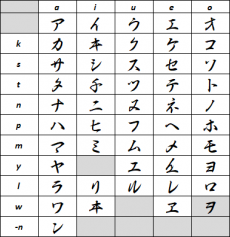 The nasal at the end of a syllable can be pronounced as any nasal stop, though it is normally assimilated to the following consonant. That is, it typically occurs as an [n] before /t/ or /s/, as an [m] before /p/, as an [ŋ] before /k/, and as an [ɲ] before /j/. Because of its small phoneme inventory, kalo allows for quite a lot of allophonic variation. For example, /p t k/ may be pronounced [b d ɡ] as well as [p t k], /s/ as [z] or [ʃ] as well as [s], /l/ as [ɾ] as well as [l], and vowels may be either long or short. Both its sound inventory and phonotactics (patterns of possible sound combinations) are found in the majority of human languages and are therefore readily accessible.

Classical Arabic is primarily VSO, but MSA (Modern Standard Arabic) tends to be SVO, favoring full agreement over partial. Chinese is classified as an SVO language. Transitive verbs precede their objects in typical simple clauses, while the subject precedes the verb. Spanish unmarked word order for affirmative declarative sentences is SVO; however, as in other Romance languages, in practice, word order is mostly variable. English word order is almost exclusively SVO. Hindi is primarily an SOV language.

Based on the above information about the main source languages for Kalo, it is primarily an SVO (subject-verb-object) language. Modifiers generally follow what they modify, as do prepositional phrases and subordinate clauses.

The interrogative particle ma (taken from Chinese (嗎) is used in conjunction with various nouns, adverbs, and adjectives to form specific questions.

Any statement can become a polar question by adding the interrogative particle ma at the end of the sentence.

Nouns only decline for number and possession. They are altered with -lo to show plurality, and possessiveness with -yo.

kalo has three basic pronouns; wa [1sg], ni [2sg], and ko [3sg]. These do not indicate gender. These can be made plural using the suffix "-lo", and possessive with "-yo".

Verbs do not change and are only ever modified by particles. There are three basic tenses in Kalo, past, present, and future. The simple present is not marked, the past is marked by le from the Chinese particle (了), and the future is marked by sa from the Arabic construction (سَـ).

Uncertainty is marked by ki, kisa, or kile. These are taken from Spanish (quizá) and used across the three basic tenses. It can also act as a subordinating conjunction, and conditional constructions, “if, whether”. It is also used to express possibility or probability.

Kalo does not use prepositions, but instead uses positional verbs as auxiliaries. These are also used as temporal adverbs in certain situations.

Determiners in kalo precede the noun they modify.

When numbers one through ten occur independently, the indicator "ke" precedes the number.

The working lexicon for Kalo.

n - all; whole; entire; every; complete; each

prep - below; under; beneath
v - be under; be lower

part - that; those (over there)

v - be able to; be capable; be possible
n - potential; possibility; capability

part - but; however; although

prep - back; behind; rear; afterwards; after; later
adv - from now on; henceforth

v - to discern, to find out, to learn
n - learning; education; knowledge

n - front side; chest; fore area
prep - before; in front; forward; ahead

part - either; or; other

part - whichever; whatever; something [INDEF]

by extension "Do you mind?"