Any planet of respectable age has undergone considerable changes and evolution of its surface geology. Some planets go in for rabid vulcanism, others seem to prefer the sedate dance of plate tectonics while still others prefer to let the rain of asteroids and meteors do all their cosmetic work for them. Gea has certainly suffered bouts of meteors in her past, but for the most part the surface changes are all due to a kind of subtle shuffling dance of those mighty Beings that inhabit the deep mantle of the planet, and it's these folks who hoist up the continental plates upon their broad shoulders and make sure all the lands of the world get to move around a bit.

A Diagramme of the Interior of Gea

At the center you can see what is called the Heart of Gea, a realm of intense heats and the solid core of the planet; the home of Yeola Stardaughter. Beyond that inner core lies the outer core and its raging hurricanes of thaumic, magnetic and electric winds, howling up from the inner core; the home of some very bizarre creatures indeed! Next is the more solid, but still rather gooey layer of the mantle; it is here the great Beings live who hold up the solid surface of Gea; they bear upon their mighty shoulders the Arcades of the Deep; lastly is Midworld itself, the landrealms and oceans of the surface world. Beyond the planet itself are the airs above, home of bird and stormcloud alike. And beyond all beyonds lies the rarified airs of Aethir, where Sawel, the Sun herself, rests in majesty at the center of All That Is, and round her whirl the thirteen planets, and their moons, and beyond all, the realm of the fixed stars. Gea has two moons: Selanna is the greater of them and is nearly her own twin; Wesara is surely a cold ball of bright ice whirling round our world. The Hotai believe that Gea has a third moon, invisible to all but themselves; and they are fools for thinking such rubbish! Near the image of Selanna is the asterism Martellus, the Hammer; near Wesara is the asterism Bastun, the Staff; and across from Sawel is Arcuz, the Bow. Several smudgy stars are visible in our skies, but most are clear points of light emanating from the distant heavens. With the aid of the telespeculon, astrologers have discovered six planets beyond the seven known anciently: farthest away is Posedonias, then Warsuwanas, then Nenurta and Mardouc, who is the king of the planets and largest of all; then come Demeter, Hestias, Pallades and Panacea, all very small planets indeed; then the broken world that is Ceres; then Ares, Gea herself, then Estarea, then Apollo and finally Setilanus is the closest to Sawel. Through the telespeculon, astrologers have also seen two great haloes, or faint rings of light: one ringing Sawel and the other in the vicinity of Ares. 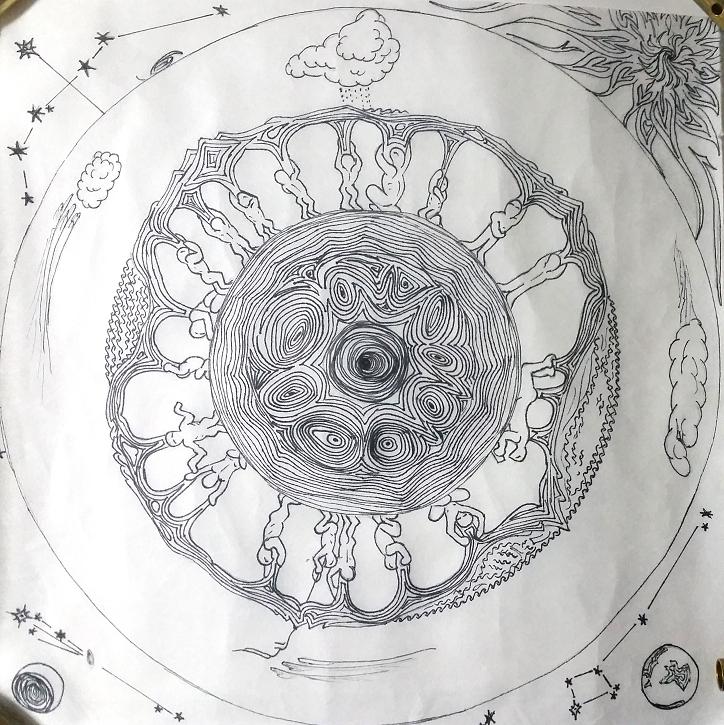 A Map of the Oneworld Realm

Gea is a very old planet indeed, and her face has changed considerably. Natural philosophers are agreed that in the remote past, all the lands of Gea were created at once as a mighty landrealm that compassed them all, and this landrealm was called Pangirtanea. This was the age of the Oneworld Realm.

A Map of the Two Primeval Realms

Some Ages of Stars later, Pangirtanea was cloven in twain by Panthalasse, the encircling waters of Ocean. The result was two great landrealms, Gardavanna in the west and Olorevasse in the east; and this was the age of the mighty dragons, by whose ponderous feet the earth of Gea was trod. 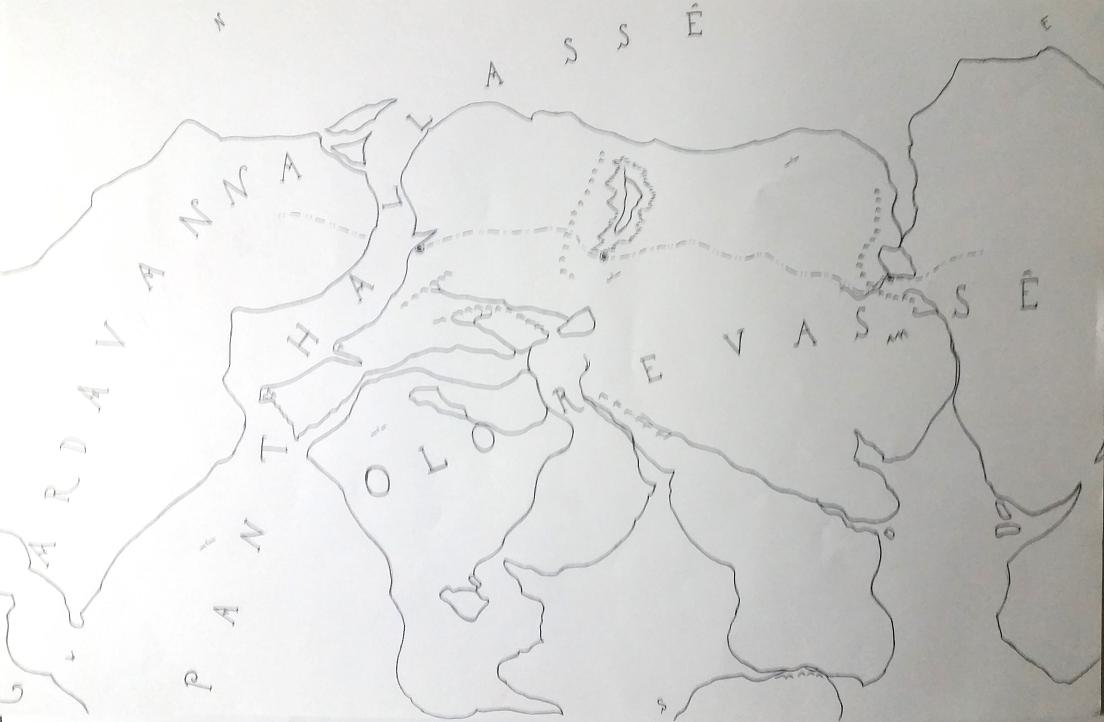 A Map of Gea at the Present Time 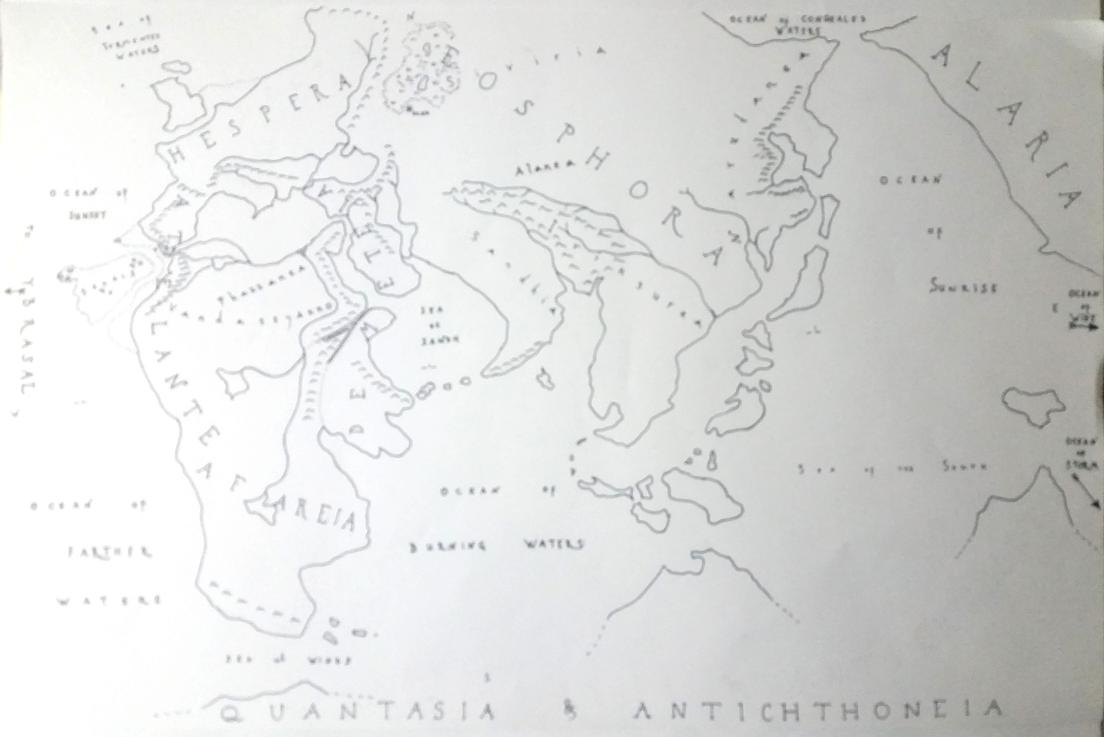 Following is a map of Sulerrio, a border town of Westmarche. To the west of this corner of Westmarche is a small kingdom of Men, Warin, that hugs the broad river Eruin and at last comes to an end across from Sulerrio. 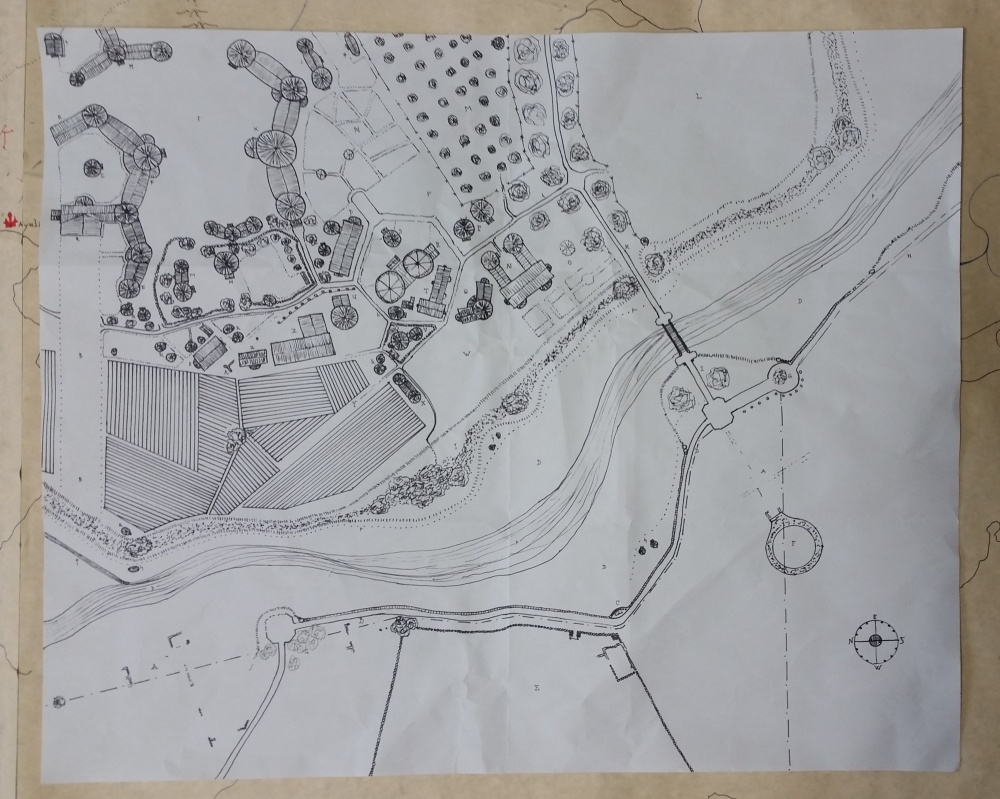 A. Old ruins: ruins dot the landscape of Narutanea; most of the ruins located in & near Sulerrio date to the time of the old empire of Men in Hoopelle. The colonade in the middle of town is thought to be rather older, perhaps a relic of the Nibukian era
B. Road to Warin: raised up above the level of the bottomlands towards the river, the east side of the road has a stone wall about eight to twelve feet high — watch your step especially while traversing this short stretch of the road at night! That last step could well be your last!
C. Old wayside shrine (ironically, a winged god or angel)
D. Reedy lowland
E. “Landsend”, the easternmost farm in Warin
F. Ruined tower: a true relic of a bygone age, this tower also known as the “West Tower” was once the abode of one of the wizard lords of old; during the time of the old empire in Hoopelle, it became a watch tower guarding the old Greenway
G. Meretrees: these mark principal boundaries of Westmarche
H. The old Greenway, a now little used alternative caravan road; it will eventually lead the stout hearted traveller down into Syansyan and the great Silk Road
I. West Gate: the bridge over the river Eruin is quite old indeed, certainly dating to Nibukian times
J. The principal defensive works of Sulerrio is the Dyke & Hedge: an earthen rampart or artificial line of hills about fifteen feet high, steeper on the outer perimeter, and surmounted by a hedge of tyansereth, a slow growing but dense hedge most famous for its palm-long and dagger-sharp thorns
K. The Greenway: this road wends its way up through the Westthridding all the way to Houe-an-Polun, the seat of the Great Queen of Westmarche
L. Meadowland
M. Orchards
N. Houses of Hospitality: here travelers of all kinds may find refreshment, rest, good food, entertainment and learn about travel through Westmarche. Travellers riding ahorse may stable their animal here as well; travellers in caravan may leave their waggons and beasts in the Meadow
O. Gardens and arbors for the use of travellers and guests of the Houses of Hospitality
P. Post and Watch houses
Q. Mathomhouse: long term storage for old but serviceable articles that don’t have a use or owner at present
R. Bath house: a commodious gathering place for the local residents, provides warm and cool chambers, plus spacious seating for combing, preening & chatting after
S. Smoking house: aroma therapy at its best! At the center of the chamber is a low brazier upon which a kind of bowl with aromatic herbs which are allowed to heat & release their vapors into the close room. Around the smoking house are the gardens that supply the herbs used within.
T. Public house: food and drink offered, plus ample space for entertainments such as story tellers, dancing and music
Þ. Civic hall: a large space where more formal entertainments, gatherings and social events take place. This building certainly dates to the era of old Hoopelle, and seems to have at one time been a church. Many of its frescoes and icons are still in place and its painted walls and mosaic floors are quite lovely
U. Library and archive:
V. Bronzesmith’s workshop
W. Ball field
X. Armory
Y. Field road and some cultivated fields
Z. Grain barn & threshing room
&. Small cottages & storage huts


a. Barn for field tools and supplies. This building also seems to date to the era of old Hoopelle, and was probably some sort of civic hall.
b. Aerodrome
c. Main street through town
d. House of healing; here also are the healer’s herb gardens and fruit trees
e. Shrine and house of monks: monks often live in or near a town and often serve as teachers and mentors
f. Market field: when a caravan stops in town, traders will often seek to exchange some of their goods for materials or goods crafted locally, often jewelry or fine bronze work
g. Queen’s house: here of course is her receiving hall, also called by some the throne room, though Daine queens rarely sit upon a throne fancier than a plain wooden stool. Guest chambers, a hall for feasting and entertainment, household and family quarters are also here.
h. Flower, herb & vegetable gardens: these double as a place of refreshment for the queen & her guests and also as food production for the community
i. Backhouse: kitchen, wash house and so forth for the queen’s house
j. Garden house and workshop
l. Town green
m. House: three families are spaciously accomodated in this house, each one having a wing off the central common hall
n. Workshop and gardens pertaining to m
o. Large house: four or so families live in this house
p. Back house pertaining to o
r. Workshops pertaining to o
s. Reed cutters’ & weavers’ huts: the crafting of fine baskets, for use locally and also for trade, is a most needful skill
t. Mill race outlet back into the river
þ. River Eruin: flows down from the Sea of Khaz to the White Sea, and thence through the Marches and on into Mentolatum & Auntimoany before joining with the waters of the Sea
w. River Walk: a trail all the way round the Dyke which, among others, is used by the sheriffs in their patrols of the border. Each queen of a holding along the borders of Westmarche must see to the vigilant watch for invasion by destructive animals or vagabonds