Qwynegold is an artlang, spoken in the island of Qwynegold, which is located in the Malackan strait. The language has borrowed heavily from European languages, as well as its neighboring Asian languages. Qwynegold has two main dialect groups: Qwadralónia /kwʌd.ra.loˑ.nia/ and Quadralónia /kwad.ra.loˑ.nia/. In this article, as a shorthand, purple color has been used to indicate that something is written in Qwadralónia and green for Quadralónia. Purple is the traditional color of Qwadralónia speakers, while green is that of Quadralónians. 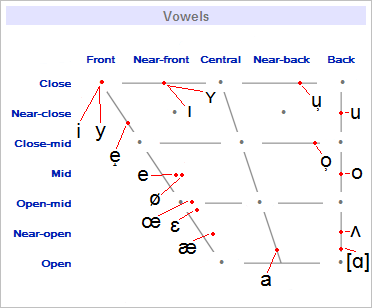 The above table shows the exact phonetic transcription of the vowels, but the following, simpler transcription will be used from here on:

Qwynegold has three length distinctions in vowels and two in consonants. The long consonants are considered to be in two different syllables at once, hence they are here transcribed as [p.p], [b.b], etc. They are also considered to be sequences of two identical consonants, phonemically. There are three special long consonants that act as single phonemic units: /lː, nː, t\t/. These do not have a syllable break between them, like the others have. The /lː, nː, t\t/ contrast with /l.l, n.n, t.t/.

Qwynegold also uses several digraphs as can be seen in this table (capital V stands for any vowel):

Some of the phonemes (16 vowels and 2 consonants) in Qwynegold come in pairs, which could be described as tense and lax. (Note however that Qwynegold does not have vowel harmony.) The lax phonemes are much more common than the tense ones. Both phonemes in a pair share the same letter, but whenever a tense phoneme appears in a word, it is indicated by a change of one of the other letters in the same syllable.

There are two morphologically marked cases on nouns in Qwynegold: genitive and locative; as well as singular and plural number. In the following table, the locative case has been used together with the word tau (in) as an example.

Pronouns in Qwynegold do not distinguish animacy.

Reduplicating of a pronoun has the meaning of an intensifier.

If the subject is a noun, a nominative pronoun is placed after it.

There are no specific reflexive pronouns in Qwynegold. Instead accusative pronouns are used.

All of these words can be used as both pronouns and determiners.

The words yado, (siki) suqu and ngwē/xir'r can be pluralized with the prefix d'-.

There is no separate word for "all". If there is a need to refer to some uncountable noun as "all", it can be done the following way: hajak GEN-NOUN/laet GEN-NOUN. GEN is the genitive prefix, in either singular or plural.

In Qwadralónia there is one relative pronoun, som, which can stand for any person or thing. Quadralónia does not have any such pronoun; refer to Syntax to see how relative clauses are handled.

The indefinite relative pronoun is e/æe.

Verbs in Qwynegold can end in -a, -i, -o, -ejn or -n. The suffixes behave regularly when attached to vowel final verbs, but the -n and -jn class of verbs are a little different. In the following table, three verbs are used as examples: etoli (run), döyshän/duyshæn (*?) and trejn (train).

If a verb is used together with the interrogative, another mood, and a tense that is not present simple, then the usual VERB-MOOD VERB-TENSE format is used, without marking the interrogative. Because the verb is moved to the end of the sentence, it is clear that the sentence is a question.

The conditional mood, which is used to mark what the consequence of some action would be, only exists in Quadralónia. In Qwadralónia, an explanation clause just follows an if-clause without any marking.

There is no *connecting form of ze (or ejn) because it can't be used together with another verb.

Just like with normal verbs, present simple tense is unmarked if used together with another mood. If a mood needs to be used together with some other tense, reduplication is done like in other verbs. The interrogative suffix may still be added to the end of the sentence.

Adjectives with the derivative ending -(d)es (see Derivation below) keep the -(d)e- but lose the -s when the comparative or superlative suffix is added.

In an active voice sentence, the word order is SVO. Neither voice or what sentence element a noun belongs to is marked in Qwynegold. Pronouns however do have an accusative case.

Transitivity is not explicitly marked, so intransitive sentences simply have the structure of SV.

The structure (Th) NOUN1 ejn ADV érNOUN2 (th) is used in Qwadralónia to describe where something is. NOUN2 is the place where it is located, and NOUN1 is what is located there. Quadralónia has a different place of the article: (La) NOUN1 ejn (la) ADV érNOUN2.

The NOUN2 can be dropped, if it is clear from context what is meant, except when the adverb is fued. The locational pronouns koa (here), uej (there-2nd p.) and est (there-3rd p.) are always used this way.

Derivational affixes marked by a dagger (†) only exist in foreign loanwords.

The infinitive is used when referring to some act as a noun. For example:

The deverbal noun form is the result of a verb, but it can also be a reference to a single act (therefore the definite article is not used together with this form).

There are two ways to form adjectives from nouns. The -i suffix is lexically determined to be used with certain words, while -(i)vas or -(d)es is the productive suffix.

The meaning of a numeral turned into an adjective is highly context-dependent. It could be used to descibe a person with a certain age, a thing related to a certain decade or century, a thing having a certain number of parts or certain measures.

When the adjectival -(i)vas suffix is used, the -i- is only included if the word the suffix is attached to ends with a consonant.

When forming the present active participle, the -vas suffix is only used on verbs that end with -i.

When turning a numeral into an adjective, and the numeral ends with a vowel, that last vowel is deleted, unless it is a halflong vowel.

When the adjectival -(d)es suffix is used, the -d- is only included if the word the suffix is attached to ends with a vowel.

If the word that the past passive participle is attached to ends with a consonant, the suffix -eet is used.

When forming the present active participle, the -des suffix is only used on verbs that end with -i.

When turning a numeral into an adjective, and the numeral ends with a vowel, that last vowel is deleted, unless it is a halflong vowel.

When turning a noun into a verb, the -l suffix is used if the noun ends with a polyphthong, in all other cases the -sa suffix is used.