draqa (draga) is a personal constructed language, "spoken" by an exile population who call their homeland Qhrya. Technically, "draqa" (with a 'q') refers to an ancient form of the language, and "draga" (with a 'g') to the modern language; however, the spelling "draqa" is often used for either. Even more ancient -.preceding draqa - is draga (pronounced /dra. ga/ and technically referred to as proto-draga), which evolved from dragat.

The history of the draga people is quite mysterious. Apparently, the civilization of Qhrya arose in the North American continent, contemporary with (but not related to) the second Atlantean civilization (~28,000 B.C.) Within 1.000 years of that cataclysm, Qhrya was completely sacked, leaving fewer than 2,000 souls to wander for almost 200 years. Finding no respite, apparently the nation astrally projected themselves en masse into a parallel reality, where they have continued to thrive. The prophecies say that eventually the nation will reincarnate into this world in the 20th, 21st and 22nd centuries, at first scattered across the continents but eventually re-unified into a small nation again.

The draga are a dream-travelling people, whose primary mode of long-distance (as well as inter-dimensional and temporal) travel is astral-projection. Hence, culturally and linguistically, they are easily adapted to "primitive", "high-tech" and even "psychic" environments.

Transliteration of the draga language uses 25 characters of the Roman alphabet: a, b, c, d, e, f, g, h, i, j, k, l, m, ñ, o, p, q, r, s, t, u, w, x, y, z - and the single-quote ( ' ) symbol to represent the sounds. In addition, the acute accent is used to represent pitch-accenting: á í ú. Traditionally, draga is written in a native alphabetic script that is supplemented by many logographs which are used to represent the most frequently used particles and lexemes. For some unfathomable reason, there is also a rare transliteration scheme which utilizes the Coptic alphabet.

Draga is a pitch-accented language:

Some vowels can be found rhoticized:

The following spellings are found interchangably in draga transliteration, ea and eu being the most commonly used:

draga Syllables are formed as follows:

draga Roots are typically 1-2 syllables in length, and generally begin with any sound but g /ɦ/. The phone e /ə/ is thus far unattested formally as a final vowel, and the phone ' /ʔ/ never ends a word.

draga has two types of morphemes, Particles and Roots. Roots are generally "content" words, and include what would be Nouns, Verbs and Adjectives in English, even Adverbs. None of those distinctions are made in the draga language, and theoretically, any applicable Particle can be used with any Root. So, to say lyíañc "Home + My (My home)", skyi'c "Running + My (I run)", and phoiac "Joyful + My (I am happy)" - the same construction is used throughout. Of course, skyi'c could also mean "My running" or "My run"; and phoiac could mean "My joy" depending on context.

This context is based on a relationship between a Predicate and its Argument(s), which are the roles available to Roots in the draga language. A Predicate may or may not be modified, or juxtaposed, with one or multiple Arguments - and the relationship of these Roots (or phrases) to each other may or may not be made more explicit by some Particle. This is the general role of Particles in the draga language: to modify the meaning of a Root, or to clarify the relationships among Roots or phrases.

However, there is a special type of Particle in draga which is always essential. This is the Speech Act Particle (SAP), which is always the beginning of a sentence. The SAP may contain evidential, or mood information - or it may indicate that a question is being asked, a command given, etc. Often, an SAP may be the whole sentence all by itself.

Some basic SAPs that will be useful right away:

BTW, the punctuation mark ' : ' indicates the end of a draga sentence.

There are two Definite Particles in draga, the weak and the strong definite particles. The weak particle acts like "the", "some", "this", etc. in referring to a specific instance of what you're talking about:

The weak (or Iconic) definite particle creates a word referencing an iconic or essential form of the concept at hand. Examples of this kind of thing in English would be: "The MAN", "Big Government", "Justice", "The Law", "God", "They", etc. Fittingly, of course, none of those particular examples are concepts that actually exist in the draga language:

Any draga Root can be prefixed with one of the number particles to indicate a count of up to six:

The Particle sei negates any Root it precedes:

Personal Pronominal forms come in two flavors: Generic and Agency. The Generic form does not specify anything about the relationship between the pronominal (i.e. the "person") and the Predicate it is related to. The Agency form specifically indicates that the "person" has acted in some way with regard to the concept described by the Predicate. This agency is not necessarily volitional (intentional) or even animate.

wañ is a Pronominal which is used in Interrogative statements, and means "which? what? where? how?,who? why?" etc. Its use will be discussed further on.

These particles are similar to Spanish "lo" , and refer to "the one under discussion" - often translatable to "that one, this one, him, her, it, etc." Its usage will also be explicated further on.

The Locatives are Particles that indicate location, motion and direction. However, their broad usage allows for simple creation of useful sentences:

Some other locative particles inlude:

This set of locatives express relative position rather direction. They are combined forms of 2 parts:

The combined forms appear as prefixes:

The Genitives are the Particles that clarify the relationship between Roots. The structure used is Predicate - Genitive - Argument - where the Predicate is a Root, of which further information about it is given by the Argument , which is also a Root. The meaning would translate to "The X (Predicate) OF Y (Argument)". The Genitive, then, clarifies what type of OF is being referred to:

These Generic forms are often the basis for complete sentences:

Notice the distinction in meaning (as well as form) when using the non-Agency form of Generic Genetive as compared to the Agency form. This is the distinction that applies to Agency vs. Non-Agency across the board in the draga language:

In case you might be wondering how to specify that it is "I" who helps the student, the best way to go would probabaly be: "ía mía thañsío'gwoi:"

Agency and the Senses

This Particle means "(used) in the role of" or "as". However, its broad usage allows for a good deal of information to be expressed in a compact way:

Genitive and Locative transformation with dei

From these examples, you can also see that any complete Genitive or Locative construction may be treated as a Root in its own right - which can then also serve as either Predicate or Argument.

There are several Particles which can be used to modify the meanings of Roots to make them refer to various manners of activity or action:

The phrasal Conjunctions hyá and dañ are extremely important in creating lengthier and more complex sentences in draga. They are used to join one phrase to another.

hyá has the meaning of "In addition, and also, etc." and continues to add information to the idea expressed in the previous phrase:

dañ has the meaning of "With regards to, about, concerning, etc.":

Any draqa sentence begins with a Speech Act Particle (SAP), often used in conjunction with a Qualifier. The SAPs fall into three types: Evidentials, Mood Indicators, and Speech Act Indicators. More than one SAP can also be used sometimes at the beginning of a sentence. A complete sentence often may consist of nothing but the Speech Act Particle:

1st Person Auditory, i.e. "It sounds to me like"

1st Person Psionic i.e. "I know it from a dream, vision, intuition, etc."

,i.e. "I heard from someone who said s/he experienced it"

i.e. "I heard from someone who said s/he witnessed it"

,i.e. "I heard from someone unreliable who said s/he experienced it"

,i.e. "I heard from someone unreliable who said s/he witnessed it"

The draga number system is base-6. During the material height of the draga civilization, a base-30 system was devised and used for hundreds of years alongside the original base-6, and some vestiges can still be found, especially in the writing system and the calendar. 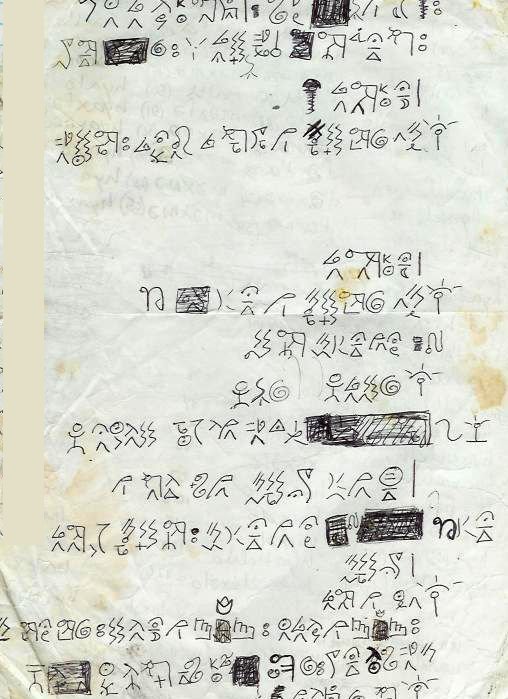