Qi (IPA /ʧɪ/) is a language spoken by about 3.5 million people in and around the country of Qila'a'o on the planet Irfik. It is one of the stranger languages of Irfik, and the first earth-man to learn and transcribe the language, Derrek Wisthaum, described it as: ...an unusual tongue ...[Qi is] an explosion in a glottal stop factory (D. Wisthaum, The Farming Lands of Irfik 2064).

Qi is written, by natives, in the Qi'a alphabet, a simple alphabet consisting of 14 characters, 10 consonants, 3 vowels, one diacritic and a letter that serves as a glottal stop, transcribed into roman as an apostrophe. The Qi'a script will appear here from time to time, just so you may get a feel for it.

It is a simple alphabet and most letters, have remained unchanged for 4,500 years.

The language is plagued by the unusual word order VSO. Adjectives always come after nouns. The only time the word order differs slightly is if there is an adverb, as adverbs come before verbs. So, 'The little ducks swam in the cool pond happily' would have the word order:

This picture shows The Qilan flag. As the Qilas are supremely proud of their alphabet, they displayed a sample for visitors, and at every border crossing, this flag flies. Transcribed, it says I'o'nadi a'a Qila'a'o or Welcome to Qila'a'o and is written on the main roads into the country from it's neighbours. The Qilas are indeed proud of their quirky language, and of their historic script. Although both the Qi'a and Roman versions of the language are equally taught in schools today.

The script itself was created as Ceolitic Irfikians migrated from their places of origin, bringing their religion, Solarriam, with them. This religion is a sun worshipping religion. So while some Ceolitics became the Proto-Bismics, some became the Durchians. These then broke up further and became the Durvish and the Qilas. The Qilas were indeed the more stout religious types, and devised an alphabet and language undecipherable to their Durvish cousins. They based their graphemes on cryptic images of the sun and its varying aurorae. The letter for A, a not complete circle with a dot above it, is said to represent Sola, god of the sun, sitting upon his throne. Of course, this knowledge is only through legends passed down, and nobody really knows what the original meanings of the letters were.

NOTE The Letters, Á, Ó and Í are not, in fact, seperate letters they are simply the ame as A, O and I, with a diacritic mark, a faint figure eight shape underneath, like an infinity sign.

The Definite and Indefinite Articles

There are four words in Qi that are classed as 'Articles' two are indefinite and two are definite.

The Qilans don't use numerals, they usually just write their numbers out. however, modern day Qilans have adopted English numerals. Here is a table of the Qilan numbers with the written out Qi'a version: 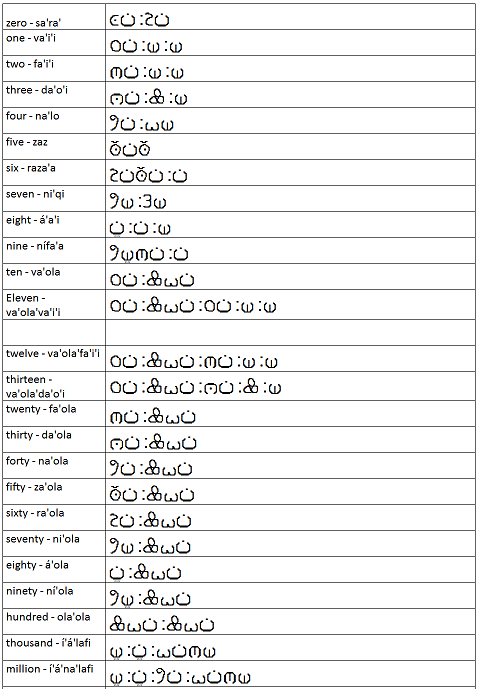 Notice how all the numbers end in a vowel. This is so ten (va'ola) can join onto one (va'i'i) with an apostrophe, making 'va'ola'va'i'i or eleven