Devised in 1997 by Claudio Gnoli of Conlang-L, the Gnoli Triangle is a scheme by which invented languages may be categorised within a three pointed continuum. At the time, it was conventional thinking that invented languages were described as being of one type or another of the three commonest types: artlang, auxlang or engelang. It was clear however that very many invented languages were mixed types and Gnoli prepared and presented the Triangle.

The basic concept has remained relatively unchanged over the years, apart from gaining a nifty colour scheme and some minor tweakage of the terminology. Essentially, either a self evaluation by the language inventor or else an evaluation performed by someone else would seek to pinpoint where on the spectrum the language is by considering a variety of factors such as the maker's vision & plans and also the language's various components. By considering multiple data points, the invented language's relative position can be placed on the chart indicating with great precision not just 'what kind of language' it is, but also 'how much of that kind of language' it actually is.

Ray Brown of Conlang-L wrote an excellent history and description of the Gnoli Triangle, which is here appended, taken from his website.

We have seen elsewhere that Claudio Gnoli described the purpose of Liva in both artlang and engelang terms. At sometime between December 1997 and March 1998 (regrettably Conlang list archive for this period appears to be missing), Claudio observed that many conlangs were of mixed type like his Liva and that one could think of conlangs as being located within a triangle whose vertices were artlang, auxlang and loglang, thus:

This became known on the Conlang list as the "Gnoli triangle."

On the original version of this page in March 2006 I displayed a similar triangle with the vertices labeled: artlang, auxlang, englang; and I called it the Conlang triangle. The name never caught on and, with the new labeling, it was still generally referred to as the Gnoli triangle. I did see it once or twice referred to as the Gnoli-Brown triangle; such an appellation is not correct as it was not I but And Rosta who first proposed changing the label of Claudio's 'logging' vertex to 'engelang'. In an email to the Conlang list of the 12th May 2002, after I had proposed a quadrilateral modification of the Gnoli triangle, And wrote:

I think the Gnoli triangle would be better if 'loglang' were replaced by 'engelang' -- at the time Claudio defined the triangle, the distinction was not apparent, and the term 'engelang' had not been created.

On the following day, I replied:

Yes, I like that. It keeps things simple. Tim May has rightly pointed out the pitfalls of a quadrilateral model. Your redefining the Gnoli triangle is neater. I suppose we must now call it the Gnoli-Rosta triangle :)

It was not renamed the Gnoli-Rosta triangle and should certainly not be called the Gnoli-Brown triangle. It has remained quite simply the Gnoli triangle even after the slight modification proposed by And Rosta.

I am proposing a further modification below; I am adding color! In the former model there was apparently some ambiguity as to what it meant if a conlang were located at the center. One contributor to the Conlang list assumed that as that point was the furthest from the three vertices, a conlang in the center was neither an artlang, nor an auxlang, nor an engelang which, within the terms of the model, must surely mean 'not a conlang.' I had always assumed that a language in the center was a third artlang, a third auxlang and a third engelang. Therefore I have adopted the Maxwell color triangle model to show this: 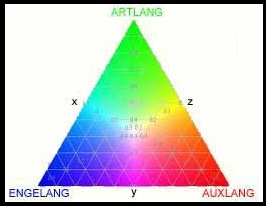 You will notice gridlines on the triangle, but I regret the figures are too obscure to read. The vertical lines show the amount of green (i.e. amount of artlangness); the green vertex is numbered 1.0 and the vertical lines are numbered 0.9, 0.8. 07. etc. down to the y edge which is 0 (no artlangness). Similarly, the top-right to bottom-left diagonals are numbered 0.9, 0.8. 07. etc. over to the x edge which is 0 and show the amount auxlangness (red) and the top-left to bottom-right diagonals are numbered 0.9, 0.8. 07. etc. over to the z edge which is 0 and show the amount engelangness (blue). Thus a language which is claimed to be "artlang 0, auxlang 0, engelang 0" cannot be mapped on the triangle - and that, in my opinion, is correct. In the center would be that conlang which is so finely balanced that it is: artlang 0.33, auxlang 0.33, englang 0.33.

As for the choice of colors:

Red had to be the color for auxlangs, if only by default (though some may see it also as symbolizing the passion displayed by some authors and many adherents of individual auxlangs). If I had chosen green, I would assuredly have been thought by some to implicitly favor Esperanto; and blue was ruled out not only by Léon Bollack's "La Langue Bleue" but also by its association with Ido (and I certainly do not want to be involved in the Esperanto-Ido controversy!). Red it had to be.

Green is suggested for artlangs as representing the artistic creativity of their authors. In this connexion, Jim Henry (author of gzb) has drawn my attention to Latin viriditās (gen. viriditātis) "greenness", especially as used by Hildegard von Bingen (Indeed, at least one web-site claims she coined the word; she did not). The word goes back to classical antiquity. We find viriditās used by Cicero both with its literal meaning "greenness, verdure" and with the derived meanings "freshness, briskness, vigor." The word is found in Augustine, Gregory the Great and other Christian writers. But Hildegard used the word constantly; for her it denoted the "blossoming creativity" found not only in the botanical world but also in the human intellect [Sandra Ballif Straubhaar, 2008, "Sarah Higley, Hildegard of Bingen's Unknown Language: An Edition, Translation and Discussion. (The New Middle Ages series.) Palgrave Macmillan, 2007", Medieval Femininst Forum 44, n. 2 (pages 158-161)].

Blue seemed to me appropriate for engelangs as representing the purposeful engineering of their authors. As Jörg Rhiemeier (author of Old Albic) observed in an email to the Conlang list (28th July 2011): "The 'cool' blue colour fits the 'cool' 'objective' atmosphere of engelangs."

As for naming the triangle, Gnoli-Brown is hardly appropriate for such a colorful triangle! Nor, of course, would it be accurate. If one is to name all conlangers who contributed to it then it should be the Gnoli-Rosta-Brown triangle. But that, in my opinion, is clumsy and unnecessary. The most important element is the conception of the triangle for mapping conlangs and that is due to Claudio Gnoli, not to And nor to me. So I suggest we retain the now well established name 'Gnoli Triangle'; and if it is necessary to distinguish the version I've shown above, the 'Gnoli Maxwell Triangle' is surely the most appropriate name.