Blop is the capital of Pusapom (the Poswob Empire). It is a small capital (human population about 45000 in the year 8743) for such a large empire. This is because humans are just one of many sepcies living there. It is very dangerous for humans, as an average of 5 humans are murdered every day by animals, primarily by monkeys, rabbits, and squirrels. None of these are natural predators of humans, they simply attack humans the way anyone would and it is considered a crime rather than "hunting". Thus, with disease added in, about 5% of the human population dies every year and Blop only survives because of constant immigration. Women are discouraged from having children because it is so violent, so anyone who isnt killed by animals tends to die with no descendants anyway. However, women are not considered "delicate" in this culture, and are treated as physical equals of men. Indeed women in Blop are about as strong as men.

Blop is situated on a lake fed by the Wupla River. This is the same river known to Pabaps as Wibla. It is sometimes called the Peace River because of the many cultures it passes through on its way, ranging from Andanese and Pabaps at its origin through Moonshines, Tarwastas, and finally Poswobs who themselves are of many different groups. At the end of this lake, however, is a waterfall which feeds into the ocean.[1] Blop is located at 35N and is the most densely populated city in the Poswob Empire, even if only the human population is included. Summer is weak here, avg temp of warmest month is only 68F despite being inland and on low ground. 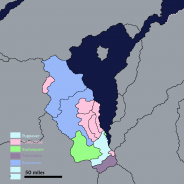 Summers are also rainy. Despite being located at 35N near the center of the continent, Blop's summers are not very hot: the average temperature in July is only 20C/68F, and this is because of the frequent rain showers. Some rain comes from the ocean to the north; other storms form in the low pressure zone that sits over the eastern slopes of the Continental Divide.[2] When the sun does come out, the temperature can indeed get hot, but this is a dry heat, and so even then the temperature in Blop is not as hot as it is in many tropical areas to the west and south.

Blop was the first city in human history to be founded outside the tropics. Even though humans had lived in the area for more than 10000 years, they had always been nomadic and unable to support a single, compact habitat for humans that would meet its own needs for food without the people needing to perpetually roam the countryside.

Blop produces nothing of its own because its only purpose is to keep the govenrment of the Empire functioning and it is entirely funded by taxes. The only jobs other than gov't are cleaning up animal messes, and that is actually conxidered a govt job as well.

By head count, Blop is slightly below 50% human, with about 48000 humans and 53000 other animals. Rabbits are the second most numerous, followed by monkeys, and then ravens. Although humans are ideal prey for ravens, they are not often preyed upon, as ravens are good at controlling their appteitte and avoiding "spree kill" behavior. Moreover, ravens consider killing a human to be a crime, and most ravens lucky enough to live in Blop would not want to risk the punishment of being exiled.

As the most interpsieces city in thwe world, humans ar ejust trated as humans and languages etc dont matter much.,

Humans come from all over, but many come frtom Lypelpyp. The "native" Blop tribes (actually called Wababa) who had been living here for approximately 25000 years were extinct long aog, torn apart by eagles and even the prey of the eagles. Instead it is low0-income , high birthrate areas such as Lypelpyp tjhat provide the poplation,knowing they will die sortl;y aftyer getting there. Humans are in the worst position of all animals in Blop because they are defenseless. The Animal Rescue League is a political organization of various animals that strives to protect humans from danger and improve their position in daily life.

Rabbits are native to this area and most just hopped on in rather than having to be carried to Blop. Rabbits also consider Blop their capital, whereas many of the other resident animals, although they know that Blop is important, do not ocnsider it their cpaital or do not have a capital at all.

Although monkeys are capable of using treansportation, essentially all are native to eh teopics and did not move to Blop oin their own; tjey were brought in bny the humans.

Blop was not founded by the aboriginal Repilian people who lived in the area because the area was very cold at the time, with an average temoerature in winter of about 0°F, and water so cold even in summer that the harbor was usually icebound. Instead, it was founded as a settlement by the early Pabap people, and Subumpamese immigrants close behind them. Their nation's name at this time was Ŋapkamša (later Džaptampa).[3] The early founders were gentle towards Repilians even though they refused to allow Repilians into their new settlement at first. They were very violent towards the rival nation of Tarwas a few miles away, and insisted absolutely on keeping Tarwas away from the coast.