Aingeljã (IPA: [aiŋge'lja]) is a conlang invented by Ángel Serrano, who started to work in it around 1992. Its all-in-Aingeljã Aingeljã grammar was published online for the first time in 2002, after which it received a warm interest from the conlang community, specially in the Conlang Mailing List and the Spanish-based Ideolengua group.

As a conlang it can be classified as follows:

Although Aingeljã has its own grammar rules, it is mainly related to Spanish, Aragonese and Catalan. These three languages belong to the western branch of Romance languages, the former two to the Ibero-Romance subgroup, and the latter to the Occitano-Romance subgroup. In particular:

Other Romance languages have a moderate influence in Aingeljã, such as:

The 22 consonantic phonemes are summarized in the following table. When in pairs, the phoneme on the right is voiced and the one on the left is voiceless.

Aingeljã is written with a modified version of Latin script with 27 letters:

The vowels can have several diacritics, accents or tildes (called tjudas in Aingeljã Grammar), which help the pronunciation. They are the following:

with this tilde is always stressed (and this tilde overrides the use of other accents).

conjugation to indicate the stressed syllable.

The only allowed combinations of vowels and diacritics are:

Some comments about specific spelling features that should be taken into consideration:

According to its Morphology, Aingeljã is a synthetic fusional language, as it makes use of morphemes to denote grammatical, syntactic, or semantic change.

The types of parts of speech in this conlang are the usual ones in Romance languages: nouns, adjectives, pronouns, determiners, verbs, adverbs, prepositions, conjunctions and interjections.

The morphological rules available in Aingeljã are: inflection and word formation.

Inflection is the process of creation of variants of a single word, all of them with the same lexeme (and therefore meaning), in order to fulfil agreement rules: gender, number, verbal conjugation, etc. In particular:

Gender (masculine or feminine) is specific to nouns. Some nouns are masculine and others are feminine, so gender has to be learnt by heart. In both cases, adjectives complementing a noun has to agree with it in gender.

Some nouns and all adjectives have masculine and feminine variants. In this case, they will appear by default as masculine in an Aingeljã dictionary, as masculine gender is unmarked. The easiest way to produce the feminine version of a word is to add an -a to the masculine. In case the masculine ends in -e, this letter is removed before adding the -a. Example: cjude bõ (m), cjuda bona (f), "good boy", "good girl".

If the masculine ends in a vowel with a nasal accent, the feminine is formed by adding -na but loses the accent. Example: bõ (ms), bona (fs), "good".

Any word ending in -a is feminine, while masculine words can end in any other letter. Of course there are exceptions and particular cases to this rules. For example, a feminine word can end in a nasal vowel. Examples: mã (f), "hand"; nesonnazõ (f), "reverie".

Gender agreement is also present in determiners complementing a noun, including articles, and in pronouns (they agree with the noun they substitute). Personal pronouns have gender only in the third person.

Number (singular or plural) expresses the quantity of a noun (one or many, respectively). Adjectives complementing a noun also agree with it in number.

As with gender, number is also present in determiners accompanying a noun, in pronouns substituting a noun, and in personal (conjugated) forms of verbs.

In a nutshell, nouns, adjectives, pronouns, determiners, and verbs are variable words, and adverbs, prepositions, conjuntions and interjections are invariable words.

See the verbs section below.

Word formation is the process of creating a new word from another one. Unlike inflection, word formation generates a word completely different in meaning, but also the resulting word can be a different part of speech, or it can have a different gender or number. There are two ways for word formation: derivation and composition.

Nouns can be masculine or feminine in gender, singular or plural in number.

Determinate articles are a type of determiners that are used mainly to constrain the extension of the noun they accompany to entities already known by the interlocutors. They correspond in English to "the".

Indeterminate articles are a type of determiners are used with the noun they accompany, to show that it represents an unknown entity for the interlocutors, which is mentioned for the first time in the conversation, or which is going to be described in a vague and indefinite way. They correspond in English to "a/an".

The forms ending in -l' are used in the same way as oul', al', ũn' and un', this is, before words beginning with a vowel or h.

Personal pronouns indicate the grammatical persons. There are two types:

Some weak pronouns are used with the so-called pronominal verbs (see below). These pronouns just give a special meaning to the verb (which usually presents both versions, a pronominal one and a non-pronominal one), usually a reflexive or reciprocal meaning.

We have already mentioned that weak pronouns appear in an enclitic position after the verb they complement. However, they occupy an advanced position and follow the first verb for compount tenses, or in periphrastic verbs. Examples: jo sent-mi, "I sit down", j'heh-mi sentat, "I have sat down", jo pot-mi sentre, "I can sit down", Jo nõ potre-mi hawăre sentat, ""I couldn't have sat down", where the verb sentre-si is pronominal.

Some prepositions followed by a determinate article are contracted into one single word. This is the case of ne ("in") and de ("of").

In case they are followed by a word beginning by a vowel or h- (included the indeterminate article), they suffer a bonding or ligature and become n' and d' , respectively.

Bear in mind that the preposition a ("at/to") is never contracted with an article, and becomes ad when it is followed by a vowel or h-.

A verb is the most important word in a sentence, and expresses action, process or state with respect to a noun. They always agree in number and person with the subject of the sentence. There are some features that make Aingeljã verbs easier than in other Romance languages:

The lexeme or stem of a verb is the core part of the verb carrying its meaning. According the lexeme, there are two kinds of verbs in Aingeljã:

The personal (conjugated) forms are generated by concatenating the lexeme with a set of morphemes. The morphological information encoded in the verb conjugation is the following:

Examples of conjugation for normal verbs:

Examples of conjugation for auxiliary verbs:

The usual word order in an Aingeljã sentence is SVO, this is, the first part is the Subject (who did the action of the verb), followed by the Verb (the word meaning action or state) and the Object (who or what received the action). It is the same order as other Romance languages, although some inversions (OVS, OSV) are possible in specific situations (see below).

The syntactic tree for this sentence is as follows. 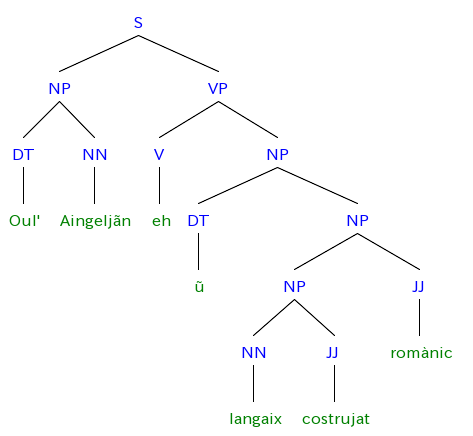 As can be seen, the language is head-initial (the head of a phrase precedes its complements).

A noun (or a pronoun that substitutes it) is the head of a noun phrase (NP). A noun can carry the following complements:

A verb is the head of a verb phrase (VP). Its complements are other noun phrases with specific syntactic functions, such as:

The usual SVO order is often reversed to OVS for emphatic reasons, or to OSV in some relative clauses (see below). In these cases the direct object appears in the first place in the sentence and is marked with the preposition a, ad (before vowels and h-), "to". If that sentence contains an indirect object as well, it is marked with the preposition per, "for". Example: jo tend ou llïur a Marïa = Ad ou llïur tend jo per Marïa = A Marïa tend jo ou llïur, "I buy the book to Mary".

In general, it is not mandatory that the subject of the sentence always appears explicitly, as it can be identied by the verbal ending (Aingeljã tends to be a pro-drop language). The exceptions are impersonal sentences (which use the pronoun se) and general-sense sentences (which use the pronoun ũ). In regular sentences, the presence of the subject is necessary when the verb is conjugated in the first or the third person of singular in certain tenses to avoid ambiguity in the subject.

A very common type of dependent clauses are the so-called relative clauses. These clauses act as an adjective of a previous noun (antecedent). They are connected with a relative pronoun.

Example: Mou pare, qwe vené ca hjer, apelle-si Jwã, "my father, who came here yesterday, is called John"; ou ristaurant a qwe jo dicé-ti hast fermat, "the restaurant that I told you has closed". In this last sentence, the pronoun qwe is the direct object of the relative clause, while jo is the subject. Due to this inversion OSV in the relative clause, the pronoun is preceded by the preposition a.

According to the agreement that the relative pronoun has to fulfil, there are several cases: