Note, this page refers to Cosmpolitan Nama. For the earlier empire, see History of Nama.

Nama is the name of a state in the Poswob Empire (Pusapom). It is different from the other states because Nama is a very old state consisting of an alliance of absolute monarchies that were historically independent nations, but agreed to join the Empire as just a single state in return for military protection. This was because they had proven themselves militarily helpless and chose to ally themselves with the gentlest of the many outside powers they had interacted with. At first, the central Blop government largely left Nama to itself and didnt even collect taxes from the common people (though they did take taxes from the kings).

As the Empire matured, however, various other territories within the Empire chose to join Nama, and Nama came to be known as a region within the Empire rather than a single state. All of these areas had been part of Nama at some point in the distant past but had been wrested away from Nama by one of the many aggressive outside powers. 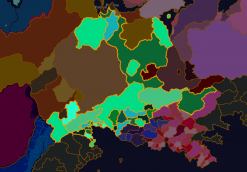 Nama early on outlawed agriculture within its borders, stating that agriculture led to famines and was not healthy. They benefited from agriculture indirectly, however, because they traded with allies in which agriculture was allowed.

Present-day Nama is uniformly Poswa-speaking, with only 5% of Namans preferring to speak any language other than Poswa. This is the strongest expression of the so-called Poswob pattern of settlement: religious and linguistic homogeneity amidst racial diversity. Nama is very racially diverse, and in most of its territory, the many historical racial groups are isolated from each other, with intermediates found mostly in cities. Along the south coast, one finds the blonde, blue-eyed Maba people living just across the bay from the dark-skinned Waru[1] people; while in the mountains immediately north of these peoples one finds the very tall Ihhai people living just a few valleys away from the very short people of Gala.

In some ways Nama is thousands of years behind the rest of the empire and the people who live there blame the kings for keeping them locked in the past. Nevertheless, the quality of life is better than many other areas, and few Namans are interested in immigrating elsewhere.

Nama is sometimes considered the Poswob homeland as it has the least cultural influence from outside, and therefore best preserves the original culture of the Poswobs. It is also the only state in Pupompom (where Pupompom is defined as "the north") that has coastline on the tropical Raba Ocean. (the rest of the Raba ocean is considered "the south").

Very diverse. The hottest, coldest, wettest, driest, and windiest climates in Nama are found in the south. The northern areas can be thought of as an average of all of the other climate types, and even in the far north, winters do not become as cold as those in the mountains of the south.

The northern part of Nama is called Pupompom. The borders of Pupompom are not strictly defined, but they include the mountains and usually also the small strip of land along the southern coast that is part of the Naman state of Dživžwata.[2]

Nama has a variety of climates. It is the most climatically diverse state, per unit area, in the Empire. However, this is mainly just because it has the highest mountains, so temperatures can range from subpolar to tropical in a shorter distance than anywhere else. Even so , the climate northj of the mountains is very different from the climate to the south. Northern Nama (which is where ther capital is, and is the part that borders the rest of the Empire) is like Nebraska or eastern Wyoming, though it does not have Nebraska's leeside low phenomenon, because the mtn range is primarily east-west. Thus storms cant appear "out of nowhere" the way they do in the Great Plains. Even so, the ocean is not all that far away, so the precipitation is moderate and peaks during winter. On the other hand, because the mtn range is east-west, cold waves can't just skip over Nama the way they skip over the area imeddsiately east of the Rocky Mtns. (e.g. Cheyenne WY is warmer than Des Moines e3ven though its 6000ft up, and "should" be about the same temp as Fairbanks Alaska.) Thus northern Nama is temperate despite being at about 30N.

The south coastr is about 150 miles long. Though its inhabitants consider it to be tropical, and tropical plants such acoconuts fgrow there, it is the coldst "tropical" coastline in the woirld because it is the futherst north. Thus, pine apples will not grow here; they myst be imp[otted from nearby lands that do not have freak cold spells in winter.

Pine trees are the most common type of tree, even in the warmest areas; this is because it is difficult for palm trees from other tropical areas to reach the Naman coast.

Nama is the most mountainous region of the empire, and in some ways resmembles the ancient homeland of the Lagi where every village is different and the central government is extremely weak.

Since Nama is majority Poswob, and the local governments of many ethnostates are seen as being largely about interpretation, the Naman government is seen as largely unnecessary to the national government in Blop, "because they're basically just us" and the Blop government can rule the people directly. Nama has for a long time participated in the "Naman Dissenter Union" (Bybabumbem) where different governments that disagree about politics are still allied with each other and will cooperate militarily.