Traditional Kharos S'fik was created 1/2006 by Pascal A. Kramm. It is the predecessor of Modern Charos S'fik.

It is used in Conlang Relay 13.

As the Relay is over now, look below for the Relay text.

The speakers of Kharos S'fik, the Hoka, are living majorly on Hokkaido (Japan's northern-most island), but a good amount of them also live on Honshû (the Japanese main island), and there mostly in the Kantô region. A small amount is still living on the Russian island Sakhalin north of Hokkaido.
Their name stems back from the late 16th century, when they first made contact with westerners (most likely Portuguese) who named them "Hocaidoes". They eventually adapted the name for themselves, but shortened it to "Hoka".

When analyzing their language, and also judging from their original Phoenician-derived script, it seems most likely that the Hoka were originally tribes coming from today's Germany and Scandinavia, as you can still find Germanic-sounding words in their vocabulary. From their original habitat, they moved more and more eastwards, crossing all of Russia on the way (which had quite an impact on their language), always looking for a good place to stay. They eventually set over to Sakhalin, and from there to Hokkaido, where they finally started settling down, while some moved on to Honshû and settled mostly in the Kantô region. Their language became strongly influenced by Japanese over time.
With the Modernisation, triggered by the Meiji Restauration of 1868, the language evolved into Modern Charos S'fik.

Sentences have SOV order. All words consist of sound units which are usually made up of CV (consonant-vowel) pairs, though vowel-only or consonant-only units are also possible.
Final consonants are tacked onto the preceding unit. Every unit takes the same time to pronounce.
The stress lies on the first consonant-only unit or otherwise on the last unit.

Traditional Kharos S'fik has three scripts, two of which are still used today.
The transcriptions into the roman script for all three scripts were devised by a German merchant around the 1870s to faciliate trade, after Japan had ended its period of isolation with the Meiji Revolution in 1868 and opened itself to trade with foreigners again. 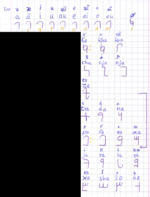 Fenix Script
The Fenix script is the original and oldest script. Like many other scripts (including our roman script), it probably developed from the phoenician script.


Its use today is limited to formal occassions, for headlines, or to express special emphasis (where the roman script would use bold or italic text).

Khaful Script
The Khaful script appeared some time after the Fenix script. It uses the same vowels and vowel marks, but completely different chars for all consonants.


It was apparently only used for a short time period alongside with the Fenix script and disappeared again soon.
It is not used at all anymore today. 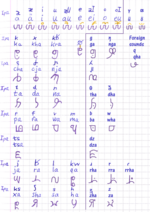 Tifet HW Script
When Buddhist scriptures arrived, people were very fond of the Tibetan handwriting the scriptures were composed in. Compared to the Fenix script, it seemed much more practical as letters were connected, and thus it could be written more fluently.


Aesthetical considerations probably further helped it to eventually replace the Fenix script as the everyday purpose script.
Today, this is still the main script used for most occassions in which Traditional Kharos S'fik is used, with few exceptions where the Fenix script is still used.

This table presents the alphabet (khakra) in its proper order.

Original text:
Universal Declaration of Human Rights, Article 1.
All human beings are born free and equal in dignity and rights. They are endowed with reason and conscience and should act towards one another in a spirit of brotherhood.

Translation:
Steps against bad feelings of the frost time

One morning of the twelfth month on the other side of the bus stop, (this) scene can be seen.

There, a boy clearly on the way to the school is in front of a garden and a fat red male cate is on his shoulder. The animal can balance (itself) well while the boy tries to shake it down. During this he has more and more panic because he knows that the bus will come soon. There the cat creates disturbance. One time he puts a paw on the fence, but it seems (to be) too cold, so it pulls itself back on the school boy's backpack. As it has made (itself) comfortable, the bus comes.

As they originally didn't have separate numbers for 8 and 9, they adopted those from Japanese into their language.
Same goes for the words for 100, 1,000 and 10,000.