From FrathWiki
< Conlang Relay 20
Jump to: navigation, search
This page contains text in the Wanya romanization. It renders best if you have the Geneva font installed.

This is Fenhl's Wanya ttorch from Conlang Relay 20's Ring 2. 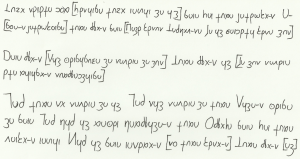 The torch written in the Wanya alphabet.

A woman and a man were walking along the coast to stay at my place. When they arrived, he asked her why she loved Kaugəltsa whose love to her was not clear to him.

“I am the guest of your family”, said the woman. The man asked which family I thought caused the fight.

The man is not my family and I am not the man's family. I was her host, so I did not want to speak badly of the man. Regardless, the woman and the man left again, but she wanted to know if he was okay. The man said yes.